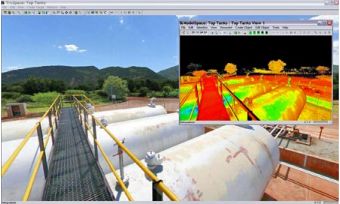 Leica TruView is only a basic point cloud viewing/measurement/markup application. Processing point clouds into final client deliverables with Leica Cyclone and/or Leica CloudWorx is where many users spend most of their time; so, this latest major release extends TruView's intuitive viewing and navigation approach into the office workhorse applications - Leica Cyclone and Leica CloudWorx. It also expands TruView's capabilities, speeds office registration, and adds valuable forensic features. End user benefits will be a shorter learning curve and higher office productivity for creating client deliverables such as as-built drawings and models.

Within the software, a "key plan" is a digital map, drawing or image of a site, with icons that indicate each scanner location. Clicking on an icon automatically opens up a view of the point cloud from that location. The view can include an overlaid photo image from the scanner or an external camera. The opened view also includes icons of nearby scanner locations.

In Leica Cyclone and Leica CloudWorx, opened views can be 360ºx360º panoramic views or 3D views. A panoramic view virtually places the user where the scanner was. Observing a scanned scene from that viewpoint is completely intuitive, while full 3D viewing lets users virtually fly around a scene to get unique perspectives.

To easily navigate around a site, users can simply hop from one icon to another on the key plan, opening scan views as desired. Or users can click on scanner location icons visible within any opened view. Both of these intuitive navigation approaches can be used with Cyclone 6.0, CloudWorx 4.0 or TruView 2.0.

Another navigation & viewing advance in Cyclone 6.0 and CloudWorx 4.0 is a "Quick Limit Box". Within the convenient panoramic viewing mode, this Quick Limit Box automatically isolates a selected area of a point cloud or model for uncluttered processing in a 3D viewing mode.

For registration and geo-referencing, Cyclone SCAN 6.0 and Cyclone REGISTER 6.0 feature automation advances that can save days in the office for large projects.

New Forensic Tools
In response to the growing demand for laser scanning in forensics, Leica Cyclone 6.0 includes new tools for analyzing bullet trajectories and for line-of-sight analyses, i.e. what someone could possibly see from any particular point in a scene. 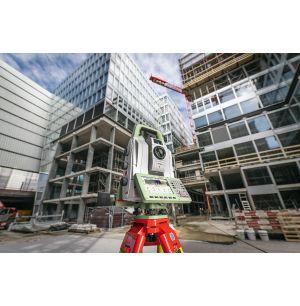