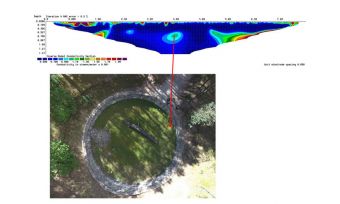 A team of archaeologists and geoscientists using remote sensing techniques have discovered an escape tunnel in Lithuania dating from World War II. The narrow tunnel is 35 metres long and was hand-dug by Jewish prisoners who were being held captive at Ponar.

Up to 100,000 people – most of them Lithuanian and Polish Jews –are estimated to have been massacred by the Nazis at the site in the Ponar forest, just outside the Lithuanian capital of Vilnius, between 1941 and 1944.

According to the researchers, in 1943, as Soviet forces were closing in on the region, the German military formed a special unit of 80 Jewish prisoners from the Stutthof concentration camp who were tasked with covering up the evidence of genocide at Ponar. Some members of the unit plotted to escape. Over the course of three months they dug a tunnel approximately 35 metres long using nothing but their hands and spoons. On 15 April 1944, around 40 of the prisoners attempted to escape through the tunnel. Many were caught and shot by the Nazi guards, but 11 reached the Jewish resistance forces and survived the war. The survivors later gave testimonies about what happened at Ponar.

The team of researchers comprised specialists from Israel, Lithuania, the USA and Canada. They set out to find the exact location of the lost tunnel using a remote sensing technique called electrical resistivity tomography (ERT). This detects changes in electrical properties underground and is often used in the oil & gas industry but also has applications in archaeology.

Initially only the entrance of the tunnel (from inside the prisoners’ pit) was located, but the researchers have now detected the rest of the passage. The team have also found evidence of previously unknown pits in the surrounding forest, which could be mass graves of more Ponar victims.

The findings at Ponar will be documented in a film set to air on the PBS science series NOVA in 2017.

Read the original article on Live Science. For photos of the Jewish Escape Tunnel see here.

Recent Developments and Promotion of Remote Sensing by ISPRS