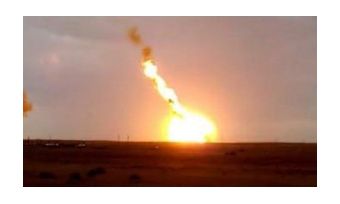 A Proton-M rocket carrying 3 GLONASS satellites exploded shortly after lift-off on 2 July. Just seconds after the launch, a dramatic failure resulted in a huge impact at the spaceport. The rocket suddenly changed flight direction, started falling and blew up in the Baikonur spaceport territory.

It then flew horizontally before plummeting back to Earth, with engines still firing. The payload fairing and upper part of the rocket collapsed and disintegrated before the Proton crashed back to the pad complex.

Initial reports confirm that there were no casualties on the ground, but launches from the Baikonur space centre may be suspended for the next three months as the area was contaminated by approximately 200 tons of toxic fuel.

Russia previously lost 3 GLONASS satellites in December 2010 when a Proton-M failed to orbit them. An investigation concluded that there had been a miscalculation regarding how much fuel was needed - the amount of oxidant exceeded the norm by 1-1.5 tons, preventing the Proton-M rocket from putting the satellites into orbit. The nominal GLONASS constellation comprises 24 satellites; there are currently 23 operational, 1 in maintenance, 1 under test plus 4 spares.

The next Proton launch was initially scheduled for 20 July with ASTRA 2E. However it is foreseen that due to the accident on 2 July upcoming Proton launches may be delayed. The mission launch date of the next GLONASS satellite which was expected later this year is now under review.