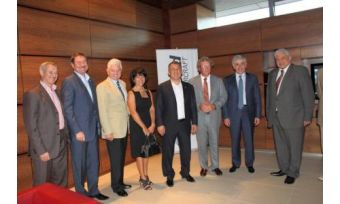 From 23rd to 24th of August 2010 top-ranking members from the Russian government and aerospace industry visited Diamond Aircraft in Wiener Neustadt (Austria). President Rustam Minnikhanov, of the Autonomous Republic of Tatarstan (most important economic region of Russia, where most of the Russian aviation industry is located), scrutinized the DA42 (2-engine, 4-seater Diamond aircraft). He will soon have delivery of his own DA42. Tatarstan is extremely interested of starting licence production of the DA40 and DA42 for the Russian-speaking countries.

Additionally Diamond Aircraft is developing and producing a technology demonstrator that will be used as a wing concept for the 150-seater Russian aircraft MC-21. The experimental wing is based on the new Carbon-infusion technology that allows building big components, like tail units or wings, with high stability at low weight. First flights of the MC-21 are planned for 2014.