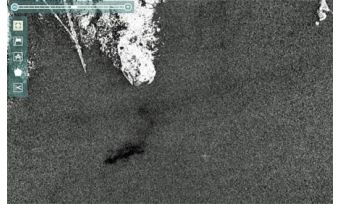 ScanEx Research and Development Center and the «Kazakh Agency of Applied Ecology» (KAPE) initiated the second stage of satellite-based radar monitoring of the northern and middle part of Caspian Sea. Survey of the environmental situation of this water area has been ongoing since 2008 per request of the governmental authorities of the Republic of Kazakhstan. This year ScanEx started satellite imagery session in March and will carry on its observations until freezing period.

Control over the ecological and shipping situation in northern parts of the Caspian Sea is done based on the operational analysis of radar images, delivered from RADARSAT-1 (Canada) and ENVISAT-1 (ESA) satellites. Radar images are acquired in real-time by the Moscow ground receiving station of ScanEx RDC. ScanEx specialists have been operationally analyzing radar and associated data (wind fields and sea disturbance maps) and hand in the products to the customers via the web-interface "Kosmosnimki - Caspian Sea" and by Internet communication channels.

In 2008, satellite-based monitoring of the Caspian Sea enabled to detect human-induced oil slicks in the water area (e.g., ship spills) and slicks, created by surfactant films of natural origin. Within the area of responsibility of Kazakhstan the biggest oil pollution area due to ship dumps (0.8 sq.km.) was detected in the approach ways to Aktau seaport.