Rapid Analysis of Changes Observed with Radar and Optical Imagery 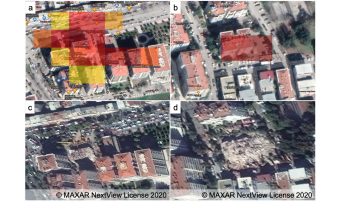 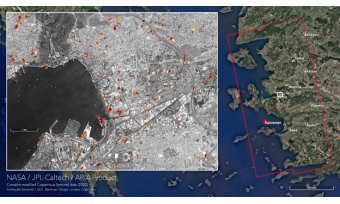 Following a magnitude 6.8-7.0 earthquake that occurred at 16-21km depth between Samos (Greece) and Izmir (Turkey) at 11:51:27 (UTC) on 30 October 2020, the NASA Disasters Program analysed radar and optical imagery to assess its impact. The variations in the magnitude and depth of the earthquake were due to the preliminary nature of solutions obtained from the seismic data. Synthetic aperture radar (SAR) imagery and high-resolution optical imagery allowed scientists to map impacts rapidly in order to help the recovery efforts on the ground.

Combining high-resolution optical imagery with synthetic aperture radar (SAR) imagery provides a unique dataset to support rapid assessment of the on-the-ground conditions. SAR imagery can be obtained through clouds independent of daylight and is sensitive to changes in the shape and roughness of the terrain. Even though Sentinel-1 data has a native resolution of about 4x20m and is often sampled at 10m, it is sensitive enough to detect 1mm/yr vertical deformation with sufficient temporal samples. In the event of an earthquake, optical images provide the much-needed rapid validation.

Based on information from the Turkish Ministry of Environment and Urbanization, preliminary news reports following the earthquake indicated that there were 58 heavily damaged or collapsed buildings, with a total of 4,424 damaged buildings in ten of Izmir’s districts. Due to the nature of a DPM, the map will change anywhere there is a strong change in the imagery – including in rural areas, which can usually be ignored for infrastructure damage mapping. Similarly, due to the high sensitivity, damage proxy mapping will also detect buildings that have settled into the soil after an earthquake, even if the buildings are still safe to inhabit. Although remote sensing data alone makes it impossible to see whether a building is still inhabitable, DPMs are an effective method for rapidly prioritizing inspections for the responsible agencies on the ground.