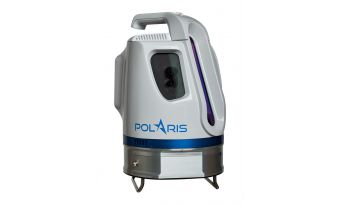 Teledyne Optech has announced the release of its Polaris Terrestrial Laser Scanner at the SPAR 3D Conference and Expo, 3-5 April in Houston, Texas, USA. The scanner will be on display at the company’s booth along with the Optech Maverick, Eclipse and award-winning Galaxy.

Bridging the gap between indoor and outdoor scanners, the Polaris can survey targets up to 1,600m away in long-range mode or collect up to 500,000 measurements per second in short-range mode. Its 360°×120° field of view (FOV) captures indoor panoramas from a single site, while its rugged design, light weight and swappable batteries let it travel deep into the field.

The Polaris automatically detects its location with a built-in GNSS receiver and selects the planned survey parameters for the site, according  to Teledyne Optech even untrained operators can execute a survey. Alternatively, operators can set up surveys in the field and resection/backsight the system using the menu-driven GUI on its touchscreen. Visitors to SPAR 3D will be able to see the Polaris’ streamlined user interface in action.

Teledyne Optech has announced more news. The Galaxy airborne Lidar just won the MAPPS Grand Award for Innovation, and staff will be on hand to explain the SwathTRAK technology that earned it the prize. By dynamically adjusting the Galaxy’s scanner FOV in response to changes in the ground’s elevation, SwathTRAK keeps the swath width and point density on the ground consistent, even in hilly terrain. This technology is developed to save clients time and money by reducing the number of flight lines required and ensuring homogeneous point density.

Finally, visitors to the Teledyne Optech booth can also get hands-on time with the Maverick, the company’s first backpack-mountable mobile mapping system, or see the autonomous Eclipse airborne data collection system and learn how a pilot can operate it alone, saving the cost of a dedicated operator.