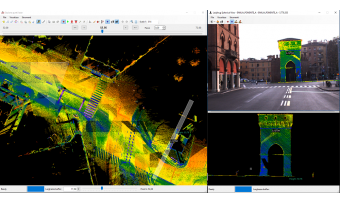 Siteco Infomatica, in collaboration with the Engineering Department of the University of Messina, carried out the high-precision survey for the technical and economic feasibility planning of the first tramway in Bologna (IT). The realization of the project, born from a European tender issued last July, required technical verification of feasibility which the team successfully performed using the Road-Scanner4 mobile mapping system.

The planned tramway route will develop for about 15 kilometres with two terminus stations: the first northeast of the city near FICO Eataly World, the well-known Italian agri-food park, and the second one in the northwest, in the Borgo Panigale area, beyond the Ducati headquarters. The tram route also includes stops in the historical centre of the city.

Approximately 30km of roads were surveyed with the Road-Scanner4. The system was equipped with a spherical Ladybug5 camera, two FARO S70 laser scanners, a LANDINS IXSEA inertial system and a DMI odometer.

The collected data was then processed with the Road-SIT Survey plugin in the AutoCAD environment. This allowed the point clouds to be displayed on the imagery, the feature extraction to be performed and the required measurements to be added quickly and efficiently. All objects can also be displayed in 3D format (sidewalks, walls, poles, etc.), thus enabling a realistic and comprehensive overview. The survey covered pavements, road sections for disabled people, buildings and fences, public lamp posts, electric poles and traffic lights.

Augusto Burchi, Siteco’s technical & sales director, said he is satisfied from a technical point of view, He is also happy that Siteco had the opportunity to contribute to this project which demonstrates Bologna's ability to renew itself, exploiting new technologies, while retaining its profile as a great historical city.