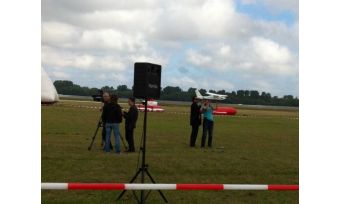 From 4 to 6 September 2013, the UAV-g 2013 conference was held in Rostock, Germany. Focusing on the use of UAVs in the geomatics sector, the event served as an excellent platform for experts from areas including surveying, photogrammetry, geosciences and more. The conference offered technical sessions with more than 70 oral presentations and around 20 poster presentations. One particular highlight was the UAV air show.

More than 200 participants attended the event. Researchers, developers, service and system providers as well as users themselves contributed to UAV-g 2013 with presentations, displays, demonstrations and discussions, all with the common aim of improving alignment between research topics and applications for UAVs in the field of geomatics. The well-organised event clearly proved to be an effective podium for this initiative.

The air show, which took place at the airport of Barth-Stralsund (50km from Rostock), was a valuable addition to the presentation sessions. A total of 15 companies demonstrated various operational systems, payloads and technologies. Conference participants got the chance to fly or launch UAVs, which produced some hilarious moments. Ultimately, besides being a conference and an air show, UAV-g 2013 was also a high-quality networking opportunity. As media partner of the 2013 event, GIM International is already looking forward to the next edition.