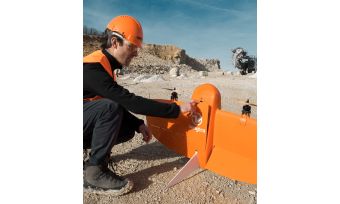 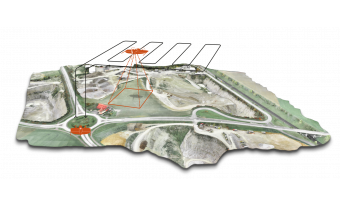 With the launch of the WingtraOne post-processed kinematic (PPK) drone, the Swiss manufacturer of unmanned aerial vehicles (UAVs or ‘drones’) Wingtra aims to set a new benchmark in large-scale surveying and mapping applications. As the result of Wingtra’s collaboration with its industry-leading partners – photogrammetry software provider Pix4D, and the GNSS board and PPK provider Septentrio – WingtraOne PPK is now able to deliver orthomosaic maps and 3D models with an absolute accuracy down to 1cm.

With the latest upgrade, the WingtraOne PPK drone can offer something that has never been seen before in drone photogrammetry: broad coverage and high resolution with ultra-precise accuracy. According to Wingtra’s CTO Armin Ambühl, the WingtraOne can cover 130ha (320ac), which is equivalent to 240 football fields, in a single one-hour flight and deliver maps at GSDs below 1cm/px with absolute accuracy down to 1cm.

By achieving such very high-precision results with a broad-coverage drone, the Swiss company is setting new standards for the industry. Until now the drone mapping world has been mainly dominated by two types of drones: fixed wings and multirotors. Fixed wings can cover vast areas but cannot deliver extremely precise data, while multirotors can deliver high accuracy but can only map small areas.

Wingtra’s advantages are twofold: vertical take-off and landing (VTOL), and the latest PPK technology, Armin Ambühl explained. VTOL combines the best of both multirotors and fixed wings, and offers hands-free operation and a smoother ride for the onboard sensors. Furthermore, efficient flying in fixed-wing mode enables far greater coverage than any comparable multirotor.

The WingtraOne can reach a new level of accuracy thanks to post-processed kinematics (PPK), which computes ultra-precise geolocations for each image by combining the GNSS data with correction data from a nearby reference receiver. Wingtra’s high payload capacity makes it possible to integrate the highest-quality sensors: the Sony RX1RII and the state-of-the-art Septentrio PPK system. An RMS error of 1.3cm horizontally and 2.3cm vertically without any ground control points is a significant leap forward in efficient aerial mapping, saving hours on the field, according to Ambühl.

After aerial data collection, Pix4D post-processing software steps in as a powerful tool to visualise the results by generating extremely detailed orthophotos and 3D models from the geotagged images. This enables very precise calculations.

The Wingtra team expects WingtraOne PPK to become a popular drone in surveying and mapping applications. According to Maximilian Boosfeld, COO of Wingtra, the unique VTOL technology has already helped the company to establish a firm foothold in the market, with applications ranging from cadastral surveying of Africa’s largest uranium mine to digital elevation modelling of Alpine locations. With the combination of VTOL capability and PPK, he sees a clear advantage over the current aerial surveying solutions. Boosfeld believes that the WingtraOne can replace fixed wings in large-coverage mapping missions in the near future, since they have just set a new industry benchmark in UAV photogrammetry.