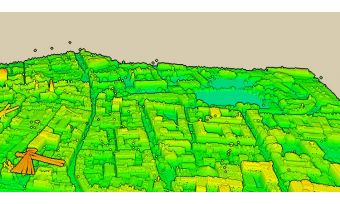 New York University’s Center for Urban Science and Progress (NYU CUSP) Professor Debra F. Laefer has released the world’s densest urban aerial laser scanning (Lidar) dataset. At over 300 points per square metre, this is more than 30 times denser than typical Lidar data and is an order of magnitude denser than any other aerial Lidar dataset. The dataset also includes the first ever urban scan with the full-wave form version of the data, as well as affiliated imagery and video. The unprecedented comprehensiveness of this multi-layered dataset enables new opportunities in exploration and modelling.  It also sets a new standard for what can be collected and used by cities around the world. The data and affiliated information is now publicly available through New York University’s Spatial Data Repository (SDR) for both personal and commercial use.

New possibilities for visualisation and analyses

Dr. Laefer, Professor of Urban Informatics at NYU CUSP and affiliated with the Tandon School of Engineering’s Department of Civil and Urban Engineering, was the founder and former head of the University College Dublin’s Urban Modelling Group in Dublin, Ireland. There, she led the development of  the ERC project’s innovations across the data pipeline from flightpath planning and optimisation to final processing for numerical modelling. “A city-scale dataset of this level can be applied to many projects to improve services,” said Laefer. “This extraordinary level of data quality, combined with open access through NYU’s Spatial Data Repository, will help pioneer new possibilities for visualisation and analyses by urban engineers, civic agencies, and entrepreneurs trying to identify and ultimately solve urban challenges of all kinds.”

“NYU Libraries' accession of aerial laser scanning and photogrammetry data produced by Professor Laefer's research team is a major addition to our geospatial data holdings,” said Andrew Battista, a professor of Public Service at NYU Wagner Graduate School of Public Service and Librarian for Geospatial Information Systems at New York University. “This collection marks the first time that spatial data associated with a major, grant-funded project has been submitted to our repository. We are confident that this dataset will be invaluable to a larger community of urban studies scholarship, and we anticipate expanding our collections as Prof. Laefer's research evolves.”

Video showing Lidar data for a portion of central Dublin featured in the dataset. 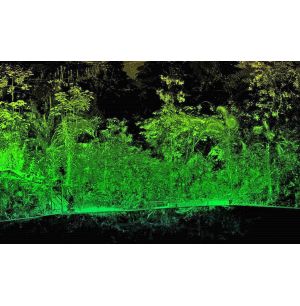