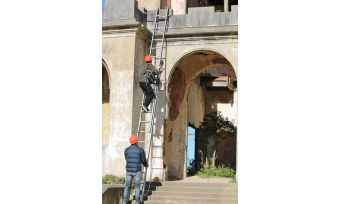 New Zealand-based company Solutions By Zeal is reaping the benefits of using the ZEB1 handheld laser mapping system to survey buildings at risk from earthquakes or in need of restoration or redevelopment. Having already generated nationwide headlines with the use of the laser scanner from 3D Laser Mapping, the company is now reporting savings of up to 80 percent in building measurement costs. A specialist in low-impact restoration and strengthening projects, Solutions By Zeal was the first to demonstrate and implement the ZEB1 in New Zealand.

Solutions By Zeal initially brought the ZEB1 to New Zealand for use on the historic Athenaeum in central Dunedin as part of project to earthquake-strengthen and revitalise the building for community use. The use of the ZEB1 on this project created ripples around the engineering industry and generated headlines nationwide, commented Lawrie Forbes, founder and director of Solutions By Zeal. Television networks were really interested in the possible implications of the ZEB1 laser mapping system given that New Zealand is rattled by up to 20,000 quakes a year and it is estimated the country has around 25,000 earthquake-prone buildings.

Since this initial deployment they have seen the chance to further enhance the approach to low-impact heritage restoration and strengthening through the capacity of the ZEB1, said Forbes. The ZEB1 reduces measurement costs by a minimum of 50 per cent and in some cases by more than 80 percent. It provides accurate floor plans, elevations and wall widths which can be used for seismic design or just renovation purposes. The ZEB1 is particularly useful for measuring old buildings for which there were no architectural plans, he continued.

Developed by CSIRO and start-up GeoSLAM, and commercialised by UK-based 3D Laser Mapping, ZEB1 uses robotic technology called Simultaneous Localisation and Mapping (SLAM). The ZEB1 system includes a lightweight laser scanner mounted on a simple spring mechanism, which continuously scans as the operator walks through the environment. As the scanner loosely oscillates about the spring it produces a rotation that converts 2D laser measurements into 3D fields of view. Its ability to self-localise makes ZEB1 ideally suited for use indoors, underground and in other covered environments, where traditional solutions that utilise GPS do not function.