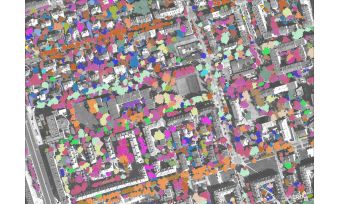 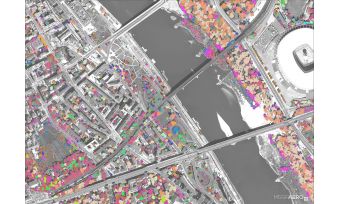 Millions of trees in an area spanning over 500 square kilometres are being monitored in an unprecedented mapping project of the urban green environment in Warsaw, the capital city of Poland. The project, which is based on a unique multisensor photogrammetric platform, will result in the Tree Crown Map: an advanced map of individual trees, including recognition of nearly 50 taxa, geometry of their canopies and their health condition. This project is being realized by MGGP Aero in a consortium with University of Łódź, University of Warsaw and Definity.

The Tree Crown Map (TCM) will present more than just the locations of all the trees in the city of Warsaw. It is also going to contain information about the species and their health condition. The project will meet the city’s increasing need for complete and up-to-date knowledge about all trees growing in the area.

Since it usually takes about 15 minutes to assess one tree, and with the estimated number of all trees in the city being close to 9 million, the traditional way of collecting data by field inspection was impossible. In such circumstances, after completing calculations, the collected data would already be out of date. That is why the municipal officials have turned to modern remote sensing technologies and scientists’ experience. “This is an example confirming the possibilities of practical application of remote sensing tools and methods in everyday practice. Remote sensing made it possible to meet the needs that could not have been fulfilled on this scale and with this complexity using previously developed methods,” explains Łukasz Sławik, director of the Environment Remote Sensing Department at MGGP Aero.

TCM has been created by a team of scientists and specialists under MGGP Aero’s lead. The first contract envisaged a pilot version of TCM for 50km2 (two sections of the city centre) which was completed last December. The second agreement concerns creating TCM for the whole city (the first half of Warsaw by June 2019, and the second half a year later).

TCM works on the basis of remote sensing data, the first set of which was obtained in August 2018 (for the western and northern parts of the city) whereas the rest of the city is due to be captured in August 2019. Aerial photos for the project (RGB with 10cm resolution and hyperspectral with 1m pixel) as well as the point cloud from ALS were acquired within two days.

However, the project requires terrain work in order to improve and test the algorithms responsible for automatic classification, the efficiency of which is assessed to be very high. According to Dominik Kopeć PhD, DSc (team leader at MGGP Aero), the average accuracy of the automatic species classification for all 46 considered taxa was 75%, and the accuracy even exceeded 80% in the case of 20 of them.

Not only for the authorities

Thanks to the first TCM made for 50km2, it has been possible to establish that nearly 25% of the area is covered by tree crowns (over 12km2). The majority of taxa are box elder, plus various species of linden (Tilia) and Norway maple (Acer platanoides). According to species analysis, linden are in the worst condition in Warsaw.

How can Warsaw use this data? It is a powerful tool with benefits both for the authorities taking care of the municipal greenery and for the city’s inhabitants. In the first example, thanks to the repeatability of the analytical processes, it will be possible to monitor the green areas and examine the influence of climate change and increasing urbanization on the condition of the city’s trees. For citizens of Warsaw, the benefits are mainly linked to more permanent tree planting, which will help to reduce smog in the city. Furthermore, TCM will offer people access to information about the greenery which will help them to better understand the decisions made by the authorities.

What about the updates?

The complete TCM is due to be submitted in June 2020. The city of Warsaw is going to collect the data for two districts in the city centre for a second time to check the potential of the method in terms of data updating and monitoring the state of greenery.

The Democratization of Lidar Data