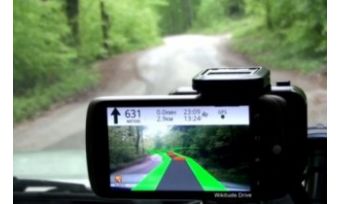 Augmented Reality (AR) has many use cases; however, it is not as widely used in location-based service (LBS) applications as it could be. An open, standard, royalty-free specification for Augmented Reality content will help to expand the AR user base by separating data publishing from data visualisation software. The first AR markup format specification, ARML 2.0, has been drafted by members of the OGC as a candidate OGC standard. This article introduces use cases for ARML 2.0, as well as background information on the new format.

Much has been written about Augmented Reality – the visualisation of information about a person, place or object as a computer graphics overlay on an image of the physical world – and about its numerous potential applications in daily life, revolving around navigation, exploration and interaction.

AR offers an alternative to a map when a user is trying to find an unfamiliar destination. An AR-assisted service allows the user to see the physical world, in real time, while viewing labels on landmarks and arrows that provide helpful directions. The labels and arrows are superimposed and ‘georegistered’ with the street or other physical world features. Ideally, just as with good map-based navigation services, the user only sees information that is useful for immediate decision-making (Figure 1).

If the user does not have a specific destination in mind, an AR-assisted tour guide allows the user to explore an area with the help of overlaid annotations. Annotations can be visual and/or auditory, such as audio guides in a museum, and may even provide precisely the same content as a tourist brochure or guidebook.

Anywhere that the mobile device's location and orientation can be determined by the device, the real world ‘lights up’ with data. When a compass detects changes in the user’s orientation, different information appears. The information presented is always contextual, as with any LBS application, but the ability to superimpose information on the real world associates the digital data with a person’s experiences in more meaningful ways. Rather than being merely a collection of ‘points of interest,’ an AR-enhanced tour guide can provide rich, context-based background – images, sound, video or 3D models – aligned with only that which captures the tourist’s attention at a specific point in time (Figure 2).

Maps are another way of learning about one’s surroundings from a different perspective. AR-enabled maps allow printed maps to be enhanced with time-sensitive LBS content when desired yet retain their traditional ease of use. For example, an AR viewer can be used with an AR-assisted map showing bus routes to display, in real time, whenever the information is required, the user’s current location and expected arrival time of the buses at the user’s stop (Figure 3).

Despite these and many other potentially interesting use cases, Augmented Reality remains, to most people, a futuristic novelty. Data that is suitable for use in AR, such as geospatially referenced annotations, is currently constrained to publishing in proprietary software silos, like the databases of popular AR ‘browsers’ such as Wikitude, Layar and Junaio. Complex content that could be valuable to users in AR, such as the 3D building models used in Google’s, Apple’s and Nokia’s map applications, is difficult and expensive to develop.

The full article is online at http://member.gim-international.com. Please subscribe for free using the Subscribe button in the left hand column.