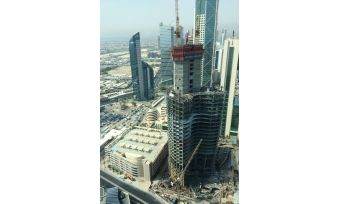 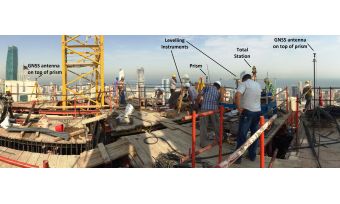 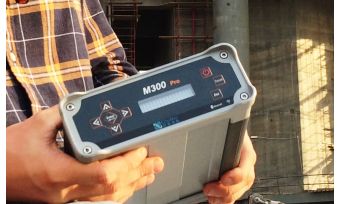 Tall towers can bend and sway due to wind, cranes and other loads. Ideally, such movements should be around the main axis designed so that, in the absence of loads, the tower stands exactly vertical. However, raft settlement, concrete shortening and construction tolerances cause deviations. The core wall control survey method was adopted to drive the new headquarters of the National Bank of Kuwait – a 300m-tall building – in the vertical direction with millimetre accuracy. The method uses GNSS CORS technology. This is the first time that signals from the available BeiDou GNSS satellites have been used to assist construction of tall buildings. Read on to find out more.

Designed by Foster+Partners the new building, which will be the headquarters for the National Bank of Kuwait, combines concrete, steel, glazing and glass-reinforced concrete (GRC) in a shellfish shape (Figure 1). To drive the tower exactly in the vertical direction the core wall control survey (CWCS) method has been adopted [1]. J. van Cranenbroeck invented this method for driving the Burj Khalifa in Dubai 828 metres above ground level and for the construction of the Al Hamra tower in Kuwait – the world’s first-ever sculptural tower and surpassing the Burj Khalifa tower in terms of engineering complexity.

Core walls are constructed bit by bit, one on top of the other. Each core wall element consists of several concrete pours. The placement of the formwork structure on top of existing core walls must be done very precisely using control points, marked by nails for example, set in the top of the concrete. The coordinates of these control points must be precisely determined with respect to the main axis of the design reference frame, which is defined as the vertical in the centre of the tower. The main measurement devices are total stations, which need GNSS control points for georeferencing purposes. Dual-axis inclinometers, precise levelling and vertical laser plummets complete the sensor fusion approach (Figure 2). To guarantee the precise upward thrust of a tower along the vertical during construction, control must be maintained of the position of each new element erected on top. Therefore, the position of the formwork structures at the top must be continuously measured.

The higher the tower is being built, the harder it is for total stations mounted on top of the building to have sight of the ground-based control points. Therefore, a network of three to four GNSS receivers has to be installed on top of the formwork as control points. After post-processing, the coordinates of the active GNSS network are transformed into the local datum and are available for any total station operating on top of the building. Comparison of the total station coordinates derived from this on-top-of-formwork network with ground control points showed differences of less than a few millimetres. As GNSS can only deliver high accuracies in differential mode, it is necessary to set up a local GNSS base station. For this the GNSS M300 Pro, a multi-purpose GNSS receiver designed by ComNav Technology, Shanghai Ltd., China, was selected (Figure 3). The device can track 256 channels simultaneously from GPS, Glonass, Galileo and BeiDou. With a large internal memory and expendable memory card for long-term big data storage, the integrated battery serves as either the primary power source or the stand-by uninterrupted power supply (UPS) backup. The built-in web user interface gives access to information on receiver status, configuration and firmware update and RINEX data download. The GNSS receiver and the AT300 geodetic-grade GNSS antenna were placed nearby the construction site and connected to a router to enable easy downloading of data for post-processing the measurements of the GNSS receivers placed on top of the building.

This is the very first GNSS CORS station tracking BeiDou satellites signals deployed in the Middle East region. The Chinese BeiDou navigation satellite system consists of two satellite constellations. The three satellites of BeiDou-1 have limited coverage and applications and have been focused on customers in China and neighbouring regions since 2000. The second generation – known as BDS, Compass or BeiDou-2 – is still under construction and will ultimately have global coverage consisting of 35 satellites. The system became operational in China in December 2011, with 17 satellites in view, and began offering services to customers in the Asia Pacific region in December 2012. The intention is to begin serving global customers upon completion in 2020. Up to 11 BeiDou satellites are visible in the sky above Kuwait. The M300 Pro capability to track BeiDou signals over three frequencies (B1, B2 and B3) increases the number of GNSS signals that can be tracked which is beneficial on a site where obstructions frequently block GNSS signals.

To compare performance of GNSS M300 Pro with the four Leica GRX1200 receivers used previously for the Al Hamra tower, a zero baseline test was conducted by connecting both receivers to the same ComNav Technology AT300 GNSS antenna. A temporary GNSS base station was set up using another Leica GRX1200 GNSS receiver. All the RINEX data collected during an hour was processed using the open-source software RTK-LIB developed by T. Takasu and Leica LGO software version 8. The differences between the two types of receivers were less than a millimetre. The baseline components between the temporary base station and both receivers showed respectively 1mm in X and Y (WGS-84) and 2mm in Z difference, which is acceptable and proved matching quality.

Robert Bou Chedid graduated as a civil engineer and is construction manager with Ahmadiah Contracting & Trading Co. Kuwait. The company was established by Abdulatif F. Al Thuwainy and Nagib Ibrahim Najjar in 1954 and is presently leading in Kuwait’s civil engineering and building construction industry.

Peter Bruce, a civil engineer, gained an MSc in geodesy and is chief surveyor at Ahmadiah Contracting & Trading Co.

Joël Van Cranenbroeck has over 30 years of experience in precision surveying. Formerly working as business development manager for Leica Geosystems AG, Heerbrugg, he established CGEOS – Creative Geosensing Belgium in January 2014. This consultancy company is specialised in high-definition positioning, in positioning infrastructures (CORS network) and in monitoring.

Figure 1, New headquarters of the National Bank of Kuwait under construction.

Figure 2, A variety of surveying instruments are arranged on top of the construction site.