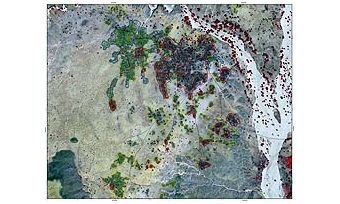 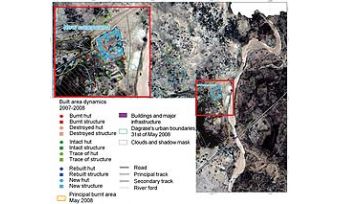 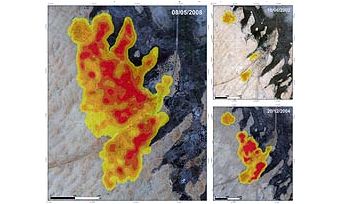 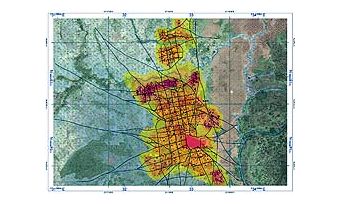 The conflicts in Darfur and Chad have led to excessive human-rights violations, including murder, rape and enforced displacement. Millions of civilians have had to leave their homes and hundreds of thousands have died as a result of attacks. The worst years of fighting were 2003 and 2004, but violence is on the increase again. International peacekeeping has not proved effective and access to humanitarian agencies is limited. A powerful tool in support of planning processes for international missions is earth observation (EO) via up-to-date satellite imagery.<P>

In early summer 2008, the external relations directorate-general of the European Commission (DG RELEX) and European Forces (EUFOR) submitted requests to cluster Humanitarian Relief and Reconstruction of the EC-funded Global Monitoring for Environment and Security (GMES) project Land and Sea Integrated Monitoring for European Security (LIMES), which aims to define and develop prototype information services to support security management of the EC. Information was requested to support, firstly, delivering EU aid and assistance through non-governmental (NGOs) and United Nations (UN) agencies in the field and, secondly, planning a EU peacekeeping mission to Chad and the Central African Republic (CAR).

Joint Approach
The complex conflict situation in this central African region involves many challenges for humanitarian relief and conflict mitigation. The provision of reliable information to support such work also poses considerable challenges, so that a promising approach was to bring together the different skills of European partners; the individual fields of expertise of those involved are listed in Table 1 (below).

A set of final information products, courses of action and an overall schedule were defined in advance according to user organisation requirements. This included defining map content, layout and legend and the preliminary structure of the final report (to be attached to the maps, describing the analyses and results within the conflict situation). A central focal point was established to efficiently manage these activities; as well as organising and supervising the various tasks, its major objective was to ensure exchange of information both within the consortium and with the user.

In April 2008 DG RELEX requested information to support planning of the EU mission to Darfur, specifically to three villages (Abu Sorouj, Sirba, Dagrase) and two internally displaced persons (IDP) camps in Western Darfur (Figure 1). To analyse the effects of raids on the three villages between 2007 and 2008 a combined approach was used of automatic detection and computer-aided photo-interpretation adapted to the complex humanitarian situation. The objective was to determine what had happened during attacks by militia in February 2008. The resulting damage-assessment maps highlight both intact and destroyed buildings and infrastructure, indicating how many people might have been affected. Further, the detection of temporary dwellings such as tents helps in estimating the magnitude of displacement (Figure 2). Considering the small features to be analysed on the ground (many huts have a diameter of less than 5m), QuickBird imagery was employed for its very high spatial resolution (0.6m).


Preceding Events
Urban-dynamics analysis for December 2007 to May 2008 in the village Dagrase showed significant events had preceded the period of analysis; many shells of huts and very little urban structure were observed. Detailed analysis produced unexpected and complex results, given the destruction already evident in 2007 and subsequent rebuilding in early 2008. Over this period and perhaps linked to attacks, fire affected a relatively large area, including huts. However, there was an unexpected net gain in visibly intact buildings in Dagrase during the period. In particular, a large compound was built to the east of the city (Figure 3).


Camp Analysis
The evolution of two IDP camps between 2004 and 2008 was analysed using object-based image analysis (OBIA), which integrates segmentation, class-modelling and knowledge-representation techniques. Satellite-based extraction of dwellings allows population estimation, taking into account statistics in the literature and oral communication with Médecins Sans Frontières (MSF). The entire Zam Zam IDP camp in northwest Darfur, see Figure 1, was classified as follows: (1) areas with high density of dwellings (traditional dwelling structures such as huts and predominantly new camp/tent structures); (2) mixed structure areas and (3) low-density areas. The period from 2002 to 2008 reveals a major increase in dwellings between 2004 and 2008, in particular in numbers of bright dwellings (tents/tarpaulins). Further analysis encompassed kernel density calculations to create dwelling-density maps (dwellings per km2) based on the semi-automatically extracted dwellings (Figure 4).

IDPs or refugee camps themselves have an impact on the surrounding environment due to pressure on scarce local resources such as water, grazing or firewood. Estimation of the magnitude of such impact is important in terms of conflict resolution. MODIS data time-series (2002 to 2008) analysis using the enhanced vegetation index (EVI) detected spatial trend patterns on areas surrounding the camps.


Data Validation
Figures obtained by automated analysis were compared to official population data from HNP (Spanish Red Cross) and UN OCHA (Office for the Coordination of Humanitarian Affairs).2 In total, based on an average scenario of dwelling occupancy, good agreement was found between the population reported and estimates based on extracted dwellings (Table 2).

EUFOR Request
EUFOR Chad/CAR requested support from the European Union Satellite Centre (EUSC) in the form of information on IDPs for two locations (Kerfi and Abdi) in eastern Chad to generate information for a more detailed view of the situation in the defined IDP camps. Again the partners jointly supported activities by providing satellite-based maps and information. Support services were designed to facilitate and improve the already operational chains. Peacekeeping operations often occur in remote areas for which no up-to-date maps are available; timely delivery of mapping and information products to enhance situational awareness for humanitarian relief operations is one of the key benefits of GMES. Rapid, partly automated mapping techniques were applied to analyse the situation in the two camps and provide results within 44 hours of data reception. The methods used within the context of the above-described DG RELEX request were further refined and adapted to user request requirements. Operational products were generated highlighting areas of high density dwellings and tents. Used in conjunction with population monitoring for both areas, these maps may indicate the return of IDP camps, one objective of the EUFOR mission (Figure 5). Analysis was conducted using a hybrid approach involving object-based image analysis and manual extraction techniques. Up-to-date land use/cover information maps were derived using the surroundings, camp, settlement infrastructure and single dwellings as indications of human presence.


User Feedback
It is important for service providers to obtain feedback about the impact of their products on user workflow. DG RELEX indicated that the overall quality of the products was very good. The analysis has shown great attention to detail and employed additional information, although speed of delivery could be improved. The EUFOR feedback was as positive as that of DG RELEX. Time constraints were taken into account and the provided products were qualified for operational use. The positive experience of co-operation between GMES service provision and EUFOR was acknowledged. EUFOR Chad would welcome further co-operation with GMES, as additional information might support future operations.


Concluding Remarks
The here described GMES service provision scenarios demonstrate that products useful for EU operations can be delivered by establishing synergies with existing operational capacities. This joint approach and co-operation between partner organisations shows the advantages of bringing together different skills, both operational and R&D, with the aim of providing rapid support for mission planning within the complex crisis situation. Such a mutual effort results in sound and reliable information products that can be rapidly distributed to the requesting organisation. This is particularly important in building acceptance for the services provided, crucial for supporting disaster management and mission planning in an affected area.