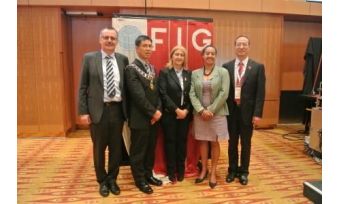 The FIG General Assembly was held from 16-21 June in Kuala Lumpur, Malaysia, in conjunction with the XXV FIG Congress 2014. Prof Chryssy Potsiou, from the Technical Chamber of Greece, was elected as new president of the International Federation of Surveyors for the upcoming 4-year term (2015-2018). Prof Potsiou has been active within FIG since 1982 and has served as vice-president since 2011, chair of Task Force for Housing and Property (2011-14), and chair of Commission 3 (2006-2010).

Prof Potsiou has been working at the Lab of Photogrammetry, Topography Division, School for Rural and Surveying Engineering, NTUA, in a permanent position since 1992, initially as a research and teaching scientist, then from 2005-2010 also as a lecturer teaching Cadastre, Land Management and Real Estate Valuation; in 2010 she was elected to the position of assistant professor in the same field of activity; and in 2013 she became associate professor at NTUA. In parallel, she has been involved in several research projects and private sector projects. Prof Potsiou is also an elected bureau member of the UN ECE Working Party on Land Administration (2001-2015) and an elected member of the management board of the Hellenic Association of Rural and Surveying Engineers. With over 30 years of experience in education, training and international capacity building in land management and administration, she will represent FIG, as a widely recognised non-governmental organisation, on the global stage. Prof Potsiou, who was the sole candidate for the presidency, was elected for the position of FIG president by a secret ballot and the General Assembly welcomed her election with applause.

Two FIG vice-presidents were also elected for the same period: Rudolf Staiger, DVW, Germany, and Diane Dumashie, Royal Institution of Chartered Surveyors, United Kingdom. Prof Rudolf Staiger was re-elected as member of the FIG Council after a very successful four-year term (2010- 2014). Prof Staiger chaired the FIG Commission 5, Positioning and Measurement, from 2006- 2010. He is a full professor at the University of Applied Sciences, Department of Surveying Engineering and Geoinformatics in Bochum, Germany. He represents the Gesellschaft für Geodäsie, Geoinformation und Landmanagement e.V., DVW (Society of Geodesy, Geoinformation and Land Management) as FIG member association. Dr Diane Dumashie is chair of the FIG Africa Task Force. She is a doctor in land economics and coastal planning, and is managing director of Dumashie Ltd. She has been substantially involved in the Royal Institution of Chartered Surveyors (RICS). She was chair of the FIG Commission 8 on Spatial Planning and Economic Development (2002-2010). She is a well-known international expert in the areas of African land issues, land and property development and economic regeneration as well as related institutional building.

Furthermore, all chair-elects of the 10 FIG Commissions and Young Surveyors Network were appointed as chairs of Commission for the term 2015-2018.

The General Assembly chose Helsinki, Finland, as the location for the 2017 FIG Working Week. This will be organised by the Finnish Association of Geodetic and Land Surveyors (MIL) and Finnish Association of Surveyors (MAKLI), with the National Land Survey of Finland (NLS) as partner. The 2018 XXVI FIG Congress will be organised in Istanbul, Turkey. This FIG main event will be hosted by the Turkish Chamber of Survey and Cadastre Engineers.