The Role of GPS, GIS and UAVs in Humanitarian Aid 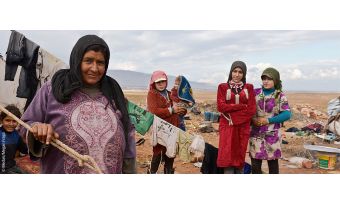 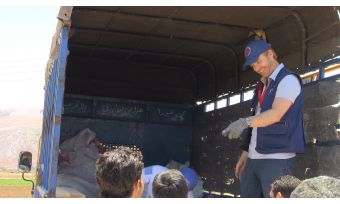 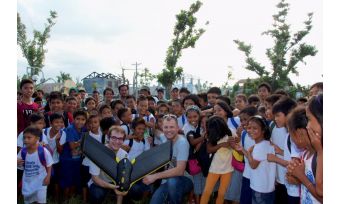 Medair is a medium-sized relief agency with outstanding commitment to work with vulnerable people who are in extremely remote and difficult-to-access places. Medair uses the power of geo-ICT to help communities of refugees more efficiently.

Since 2009 it has been Medair’s policy to employ GIS-trained staff assigned to specific projects. The number of such employees fluctuates, but there are usually around five or six at any given time – a small group, but with significant effect. Good examples of their work include their role in getting relief to Syrian refugees in Lebanon and to the homeless in the Philippines.

Everybody knew that there were informal encampments hosting refugees in Lebanon but no one knew exactly where they were, how many people were staying in each one and what needs they had. After crossing the border, thousands of families simply disappeared from the map. Today, around 1.5 million Syrians are seeking refuge among Lebanon’s population of 4 million. To illustrate the pressure that brings: the European Union, with a population of 500 million, cannot agree on taking in 200,000 refugees. Since 2014, Medair has been the lead mapping agency amongst humanitarian relief organisations in Lebanon. Using hand-held GPS and mobile GIS, Medair teams survey these informal ‘tented‘ shelters every month to update the maps and the assessment data pertaining to the refugees in order to know where they have settled and what aid they need. To date, Medair has mapped more than 1,200 Syrian refugee settlements. They have also trained five other relief agencies to map the other regions of Lebanon.

Medair manages all the spatial data collected to maintain one comprehensive dataset. To facilitate data collection and spatial data analysis Medair works with Esri’s ArcGIS, including on the mobile teams’ mobile devices. The GIS data is used to support inter-agency coordination. Without such coordination, humanitarian agencies would find it almost impossible to work in an environment such as the Lebanese Bekaa Valley, where hundreds of thousands of refugees are living in ‘tents’ scattered over a wide and relatively remote area, and it would certainly be more costly. The assessment data is a source of information about the type of assistance needed and provided. This is coordinated through Last Mile Mobile Solutions, software developed by World Vision. Each beneficiary in the distribution chain is issued an ID, which enables Medair to digitally track them and the intended/executed interventions. All of this data is then merged into Qlik View analytical software. In this way Medair gets a detailed overview of what is needed and what has been provided, including exactly where and when.

Joel Kaiser is Medair’s emergency response officer and is also responsible for the development and implementation of geomatics instruments. He is positive about the cost-benefit ratio of Medair’s investments in GIS-related tools. “Using geomatics enables us to save time by knowing exactly how many refugees require assistance, and what type of help they need, at each and every settlement. This is very important because funding to support the refugees is decreasing. Therefore we have to learn to do more with less money, and GIS helps us to do so.”

Patterns emerge over time and Medair analysts can increasingly discern trends in the aid required each month. This enables them to initiate assistance in advance, in anticipation of potential hazards. Kaiser: “However, quantifying cost savings is not easy, because those savings are re-applied to meet more needs in an ever-increasing population of refugees. But based upon my experience and observations, I would estimate that we are able to reach 15-20% more refugees as the result of streamlined aid delivery.”

UNHCR has asked Medair to oversee and build capacity within other NGOs using common tools and operating procedures. Furthermore, in many of the countries where Medair is active, geomatics training sessions are being held to discuss GIS and remote sensing, provide an introduction to GIS and GIS software and practise mapping methods.

Medair also uses unmanned aerial vehicles (UAVs) to expand the situational awareness and obtain better analysis of humanitarian needs in remote places. The best example comes from the Philippines following Typhoon Haiyan, which devastated entire cities and left hundreds of thousands of people homeless. Many of those worst hit were living in informal homes in coastal areas. When coordinating recovery efforts in these disaster zones, the community leaders could not rely on the out-of-date maps they had. Medair worked together with another NGO: Drone Adventures. By deploying senseFly’s unmanned e-Bee aerial systems, which weigh 700g and have a wingspan of 96cm, they took thousands of high-resolution aerial images of some of the most devastated villages. The images were merged into 2D maps and 3D terrain models using Pix4D software for data processing and orthomosaic generation in a process which mostly took just one to two days. The very detailed photogrammetric maps were then distributed to local leaders for use in assessing the situation in their communities and planning reconstruction efforts.

Medair used the high-resolution base maps to assess hazards in the villages, to identify where people could reconstruct buildings, to detect safe or safer places, to monitor reconstruction work, etc. The UAVs were also used to assess the local environmental damage; local livelihoods depend on resources such as coconut trees, but many trees had been damaged or uprooted. Therefore, the drone team also made low-resolution base maps of the surrounding area. The ground resolution of these orthomosaics was 1.96 inches (5cm) for villages and 3.1-3.9in (8-10cm) for rural areas. As time passed by and electricity became available again for at least part of the day, both the local authorities and relief organisations could utilise the high-definition images hosted online. “We are committed to using UAVs more often,” comments Kaiser. “It is an effective way to help build situational awareness between decision-makers. In this way, aerial imagery helps us make better-informed decisions faster and deliver assistance more quickly.” UAVs were also used in Nepal to assess the situation after the earthquake in 2015. The Medair GIS staff members in Nepal have recently been trained to pilot UAVs themselves and will fly them again in 2016.

“Medair welcomes geomatics manufacturers who prioritise ease of use and reliability. Humanitarians interacting with data do not have training in IT, GIS or related technologies,” reminds Kaiser. He also points out that it can be difficult to connect location-based intelligence software to traditional business intelligence reporting tools. Users may have to wrestle with pre-built connectors that have limited functionality or build their own. A new generation of location intelligence tools must clear such hurdles. Additionally, manufacturers should always take into account the fact that connectivity is often unreliable, that datasets may contain non-Latin script (e.g. Arabic) and that humanitarian agencies rarely have sufficient capital to sustain large investments.

Data security is another issue. In regions where NGOs are active, data is shared among the humanitarian agencies through the coordination structure established by UNHCR. Kaiser refers to Lebanon as a good example: “By helping to coordinate the data in Lebanon, Medair is actually reducing the risk associated with many organisations storing and handling data in different ways. It makes the process more accountable. We have not experienced any misuse of data, but we remain vigilant; we secure sensitive datasets in separate, encrypted databases to ensure that no single breach of security or data theft would endanger refugees. But members of the geomatics industry should realise that, since we are handling sensitive data, security must be of the utmost importance in their innovative technology.”

How the New EU Directive Will Change the Geospatial Data Market