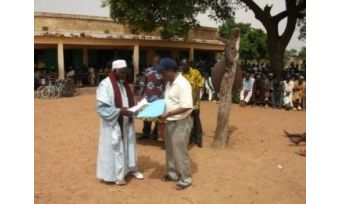 The global eradication of infectious diseases through highly coordinated campaigns has been successful. Smallpox affecting humans was officially eradicated in 1980 and rinderpest, affecting ruminants, was declared completely eradicated in 2010. Global campaigns to eradicate polio, guinea worm disease, yaws and malaria are under way.

Although insecurity of tenure is not a disease, its impact is nevertheless devastating in terms of trapping people in poverty, displacing communities and making them homeless, and reducing food security and creating hunger. Only about 30% of the world’s population are covered by official land administration systems, while the rest potentially suffer from insecurity of tenure. This is a human rights issue. Therefore, should a global campaign to accelerate the eradication of insecurity of tenure be planned and initiated? To achieve, say, 80% global security of tenure by 2030?

The timing is certainly apt. Methodologies and supporting technologies have recently emerged to scale up the capture and recording of land rights: the Fit-For-Purpose Land Administration Guiding Principles, recently launched by Global Land Tool Network (GLTN), provides an overall framework for quickly delivering affordable, nationwide land administration solutions; the Open Geospatial Consortium (OGC) is creating new standards for land administration; land administration is now a focus for UN-GGIM; the Voluntary Guidelines on Responsible Governance of Tenure is published by UN-FAO and now globally recognised; and the Sustainable Development Goals (SDGs) have highlighted the key role of land rights in achieving many of these global objectives. Land issues are currently high on political agendas and it therefore seems that the time is right to initiate this global commitment.

The proposed timeframe for this global campaign will not be achieved using the current set of stakeholders active in the land sector. Global players such as Facebook and Google, for example, need to be encouraged to support this campaign to provide innovative technology solutions. For instance, Facebook recently used artificial intelligence software to scan 14.6 billion satellite images to identify human-built structures in 20 countries across Africa. The social network hopes to use the information to determine where internet-beaming Aquila drones could best be deployed. New, valuable sources of data to prioritise and implement security of tenure could be achieved through new partnerships.

However, building sustainable land administration systems is not just a technical issue. This global campaign will only have a chance of succeeding if strong political support is generated within the countries most at need of achieving nationwide security of tenure. This campaign, with the right champions, has the opportunity to raise insecurity of tenure as a global affliction to be defeated and to trigger the essential political support.

It is time for the land sector communities to be more ambitious in their goals, involve new partners to support innovation, adopt highly scalable approaches, collaborate more effectively under this common objective to eradicate this scourge on the Earth and create land rights for all. This proposed global campaign could well be the necessary catalyst for change.