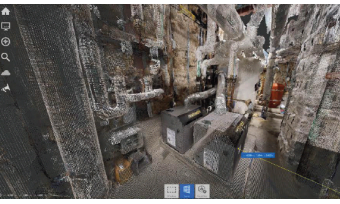 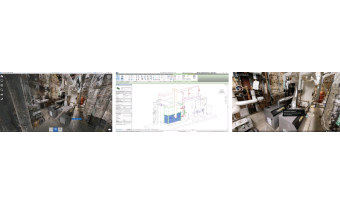 Aryn Bergman, lead engineer and founder of TL Circle, is frequently confronted with complex engineering projects requiring days of laborious, time-consuming BIM modelling in Revit, usually from hand-drawn measurements, notes and photographs. One project he recently completed involved a complicated MEP room of a high-rise apartment building in which the domestic water heater needed to be retrofit.

(This story is brought to you by Matterport)

Hand measuring the boiler room - from wall to pipe, from pipe to pipe, floor to ceiling, floor to pipe, etc. - would take 4-5 hours for a contractor to accomplish, and 4-5 days for an engineer to model in Revit, as well as potential additional follow-on site visits.

Bergman also knew traditional laser scanning (e.g. with a Leica system) in such a complicated and tight space would require a large number of scan positions. Laser scanning would also take longer than manual measurements in addition to the time required to register the point clouds and still require hand modelling. Finally, acquiring a laser scanner would add a significant unnecessary, expense to his budget.

So he began searching for new tools which would make modeling the MEP room more efficient, without adding additional time or cost to the budget.

From there, Bergman saved the ReCap file and imported it directly into Revit to model on top of the 3D structure. When he compared the point cloud data to his hand-taken measurements, he found they were accurate up to the centimetre. With similar projects, modelling in Revit with hand measurements would have taken 4-5 days to trace over the as built. With the point cloud, it took him 2. Due to the accuracy of the point cloud, measuring in the future will be minimized, cutting his time spent measuring by 60%. And since the point cloud is delivered from Matterport as a single, fully registered point cloud there is no time spent manually registering the data to get a final point cloud.

Modelling time in Revit was decreased by 40% which was also expedited by his 24/7 access to perfect, immersive visual references to the job site. This reference material is immediately at hand without having to manage any image files. And modelling with both an accurate point cloud and visuals is the key to modelling efficiency.

Bergman frequently will go back to the job site to visually confirm that the Revit model matches reality. With the Matterport 3D Showcase he no longer has a need to go back on site to confirm that the existing conditions were modelled correctly, removing as much as a day’s travel from his schedule.

The typical price for building a BIM model of a MEP boiler project like this would be approximately US$10k, but with the optimized modelling process, the price drops to US$5K-6K. Bergman estimates that the field to finish time for projects is cut in half when compared to projects done with manual or laser system. By expediting the process, Bergman is able to offer more competitive prices, which has opened him up to new markets as well as increase wages for his employees.

Other projects completed without the Matterport system had approximately 70% more inconsistencies with their as builts. With Matterport, that number was reduced to nearly 0.

“Matterport has helped cut my field to finish time in half. I’m excited to leverage this new tool to improve the BIM modeling process.”

AEC professionals from Gilbane, Hensel Phelps, Mortenson, and more are using Matterport’s Pro2 3D Camera and Cloud platform to streamline workflows, minimize labour costs, reduce site visits, and to mitigate risk. Sign up for our live webinar to learn how you can use Matterport’s 3D reality capture solution to make your projects more efficient and cost-effective.