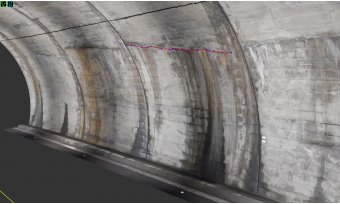 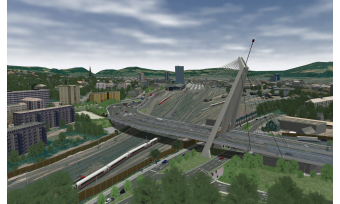 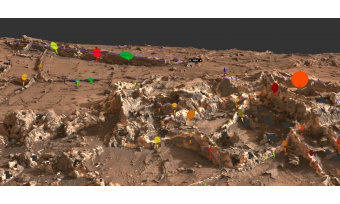 Advances in capturing techniques such as laser scanning and photogrammetry have significantly increased the volume of geospatial datasets. Big geodata has become an important asset for analysis and decision-making, but also poses a challenge for state-of-the-art visualisation techniques. This article presents research results addressing this problem for the infrastructure and planetary science application domains. The methods discussed here enable users to fluently explore and efficiently analyse the growing wealth of geospatial data.

The data volume of 3D reconstructions is steadily growing for two reasons. Firstly, there is a demand to increase the accuracy of data acquisition, now reaching even sub-millimetre scales in some use cases. Secondly, the geographical area covered by a single 3D scene is becoming larger and larger. Many application domains expect both of these requirements to be fulfilled. Terabytes are quite typical today. While this is not a big problem for the current capturing devices, it easily exceeds memory and processing limits of interactive visualisation tools. Users are often forced to either reduce the datasets or to subdivide them and study single parts separately. A reliable monitoring or exploration tool, however, should allow for high-accuracy 3D models that cover large regions or structures. Users want to experience 3D reconstructions in a broad range of scales by seamlessly zooming in and out. This is important not only to observe small features in their much larger geospatial context, but also to efficiently compare different regions of interest and establish spatial relations.

Research into this visualisation problem resulted in the high-performance visualisation framework called Aardvark. It is based on specific requirements from the industry and has been further developed in close cooperation with academic and commercial partners. The geometry of reconstructed objects is represented by a well-balanced hierarchical data structure, called Ordered Point Clouds (OPCs). It consists of several levels of detail (LODs), each of which corresponds to a certain geometric accuracy. Therefore, OPCs are multi-resolution scene descriptions. This is one major advantage in comparison to unordered point clouds. Another advantage is the ordering, which allows efficient generation of meshes on the fly.

A smart metric is applied to choose the appropriate LOD during interactive visualisation. This metric depends on the distance of the viewpoint, the viewing angle and the area that a surface patch covers on the screen. LODs are smoothly switched depending on the user’s navigation through the scene. Large objects such as terrains are subdivided into several patches, for which LODs are chosen independently. Thus, distant areas have a lower accuracy than regions close by. This technique enables an interactive virtual exploration of very large geospatial scenes from points clouds with billions of elements.

There is a growing demand for data-driven navigation and selection in most application domains. An effective visualisation and analysis system should therefore guide the user to locations where the data has certain properties (and highlight them). These properties are often the result of simulations, for example a visibility analysis or the detection of surface anomalies such as cracks. To this end, spatial and non-spatial visualisation can be combined by linked views in Aardvark. Users then can interactively study non-spatial data using visual analytics tools. Any data entities selected are immediately highlighted in the 3D viewer and the user is guided to the relevant locations on demand.

Research has also been done on methods to visualise non-spatial data directly in 3D space. This establishes the geospatial context of sensor measurements and simulation results. Such techniques include false colour texturing of 3D surfaces, embedding appropriately aligned 2D diagrams or position-dedicated 3D objects which display data properties. They can also be animated to show the temporal dynamic of some data.

Users also want to measure and annotate 3D reconstructions to perform manual analysis. Examples are distances, inclinations, orientations or simply obtaining the georeferenced coordinate of a surface point. Most CAD applications provide tools for that. But for very large scenes, highly optimised methods are needed to efficiently determine the location clicked on by a user. These methods build up bounding volume hierarchies that subdivide 3D space according to the scene content and thus significantly reduce search time. This data structure ignores LODs and only subdivides the geometric representation with the highest resolution. Since only the highest resolution is relevant for reliable measurements, LODs are an optimisation for rendering while bounding volume hierarchies are one for interaction. These research results have been successfully applied in the three use cases described below.

Civil engineers rely on high-resolution 3D reconstructions of tunnel walls to detect flaws such as deformations and cracks. This is a typical application for which a high accuracy is demanded while simultaneously covering a large area. Cracks are rather small, but tunnels can be very long. Aardvark is able to show thousands of surface anomalies at sub-millimetre scale over several kilometres of a tunnel reconstruction. Small features in the distance are thereby enhanced or accumulated so that they can be better perceived. The visualisation system guides users to regions of interest by data-driven navigation. An example are cracks in the tunnel wall which exceed critical dimensions and where repairs are needed (see Figure 1). To support the detection of changes over time, data from different dates can be visually compared. Consideration of such temporal aspects helps in planning the maintenance cycle of tunnels.

For most large infrastructure projects, it is mandatory to assess their impact on the urban and rural environment before they get underway. Many shareholders want to involve the public or are even legally obliged to do so. For interactive exploration, a virtual reality application is needed that supports very complex scenes. They should be realistically rendered for sufficient credibility. Applied research on this topic (in close cooperation with industry partners) resulted in GEARViewer, a geospatial rendering framework based on Aardvark. It supports huge geospatial scenes consisting of large-scale terrain models, buildings, roads, tramways, railways, tunnels, vegetation and a skylight model. Everything is georeferenced. It can import GIS data and turn it into 3D objects. In the future, it will also support building information modelling (BIM) standards. GEARViewer considers illumination conditions for both day (skylight) and night (street lamps). Furthermore, it simulates traffic in a simplified way including cars, trams, trains and pedestrians. In summary, GEARViewer enables a realistic and vivid experience of planned infrastructure projects and allows assessment of their effects on the real environment. It has been used for many planned projects in Austria and Germany, such as A5 Nordautobahn, A26 in Linz and a highway project in Cologne.

In this extraterrestrial use case, planetary scientists – especially geologists – require 3D reconstructions of the surface of Mars as an important aspect of mission planning. Studying images from rovers alone is insufficient, tedious and error-prone. In the field, geologists investigate structures from various perspectives and distances by walking around before taking measurements. This is necessary to understand their characteristics and formation. A special 3D viewer based on Aardvark, called PRo3D, has been developed to enable planetary scientists to virtually explore reconstructions of the Martian surface. It is based on high-resolution geometry created from rover imagery (e.g. NASA’s Curiosity rover) by Joanneum Research. Due to the multi-resolution approach, these models can be embedded into lower-resolution terrains created from orbiter imagery, establishing the larger geographic context. PRo3D allows geological analysis much like real field analysis. Users can navigate fluently through the reconstruction and get the full spatial experience. The viewer also provides various interactive tools for performing measurements and making annotations directly in 3D space. Figure 3 shows the result of an extensive geologic interpretation session for a region called Garden City within the Gale crater on Mars. The dimensions of various structures are obtained by distance measurements. Polylines are used to delineate stratigraphic boundaries. A special tool called Dip-and-Strike reveals the inclination of layers and is used to derive ancient flow directions. PRo3D has been used for many such interpretations by scientists from NASA and ESA.

Research into geospatial visualisation resulted in the Aardvark framework, which has evolved into a mature basis for the development of interactive solutions enabling virtual exploration and visual analysis of huge datasets. Small geometric details can be investigated within large geographic scenes that also integrate non-spatial data. In the future BIM compliance will be addressed, as this has become very important in the infrastructure domain. Furthermore, research is ongoing into the combined visualisation of spatial and non-spatial data to provide a comprehensive and holistic experience of complex scenes.

The research at VRVis is supported by governmental funding under the COMET programme. Contributions to planetary science were the result of the EU-funded FP7 project called PRoViDE (http://www.provide-space.eu/).