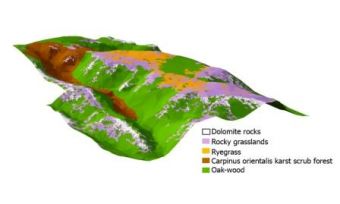 Today’s spatial applications increasingly require very high-resolution multispectral images with photogrammetric accuracy. The Hungarian Interspect Research Group recognised this trend in 2006 and developed a series of cameras to satisfy the exacting GIS users. Here, the authors provide an overview of the cameras’ history and features, and claim that the imagery reveals unparalleled detail, thus allowing large areas to be captured at very high aircraft speed.

In Hungary, the use of multispectral images started back in the seventies; initially for water management and environmental applications, followed by forestry, archaeology and other uses. Satellite images gradually became available, enabling the exploration of remote sensing technology which focuses on determining land uses, tree species and much more from multispectral imagery. In contrast, photogrammetry has always focused on geometric accuracy for renewing topographic and cadastral maps and creating orthophotos and digital elevation models (DEM) from overlapping B/W and RGB images.

To monitor environmental problems, manage water networks and handle other issues, GIS users are increasingly demanding multispectral images which have the rich detail and geometric fidelity of photogrammetric imagery. The present large-format digital aerial cameras have a maximum ground sample distance (GSD) of 2.5-3cm when they compensate for motion blur, but the duration of exposure may heavily limit the overlaps between images. For example, the GSD of two of the highest-quality calibrated cameras – Leica’s ADS80 and RCD30 – is 3cm if ground speed is above 160km/h. To avoid changes in environmental conditions and illumination when surveying large areas, however, higher speeds may be required in order to shorten the duration of flight. The cameras developed by Interspect Research Group (IRG) from Hungary achieve a resolution of 0.5cm with 65% overlap even when the aircraft flies faster than 160km/h.

Continue reading in the online edition of GIM International.