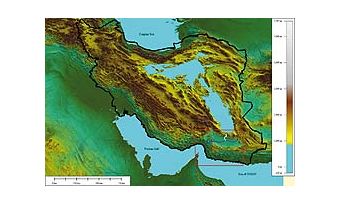 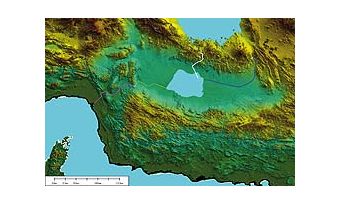 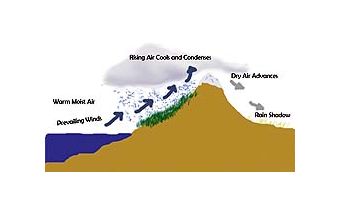 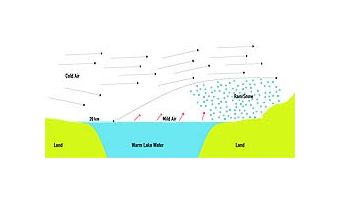 Filling the low-lying Lute and Namak deserts of Iran with seawater may help solve the country’s age-old water problems, creating nearly 6,000 kilometres of shoreline and 160,000 square kilometres of water surface area. It could provide significant possibilities for transportation, land use, agriculture, aquaculture and recreation, as well as increased rainfall and improved climate. But realising the project presents an enormous engineering challenge.<P>

Iran’s Lute and Namak deserts are two large, low-lying areas making up about 10% of its land area (Figure 1). The deserts are surrounded by a wall of mountains lacking any low-lying passes, so that the configuration looks like two giant, irregularly shaped bowls. If these are filled with water it can escape only through evaporation or ground seepage. The southern edge of one of these deserts, Lute, borders on an unlimited supply of open sea, so that we wondered what would happen if large quantities of seawater were transported and poured into these deserts. Could it be done? How high could it be filled with water and, more importantly, would this solve Iran’s age-old water problems?

Geospatial Model
To determine feasibility, define the scope of work and estimate measurements, we visualised the end product. For this purpose we first developed a digital elevation model (DEM). Secondly, various water levels were simulated in the digital model to observe coverage and extent. Thirdly, a water elevation of 865metres (2,838ft) was established as the maximum possible water surface elevation. Lastly, shoreline distances, surface areas and volumes were calculated at various elevations.
The measurements for various water levels are reflected in Table 1. Totals for 865-metre water surface elevation are 5,923 kilometres perimeter, 161,119 square kilometres surface area, and 31,092,320,019,959 cubic metres water volume.


Transporting Water
A glance at the figure of 31 trillion cubic metres makes apparent the challenge. Fortunately, power is not an issue; this part of Iran is a major source of natural gas. The problems are posed by the number and types of pipes and pumps.
The most likely route for piping (shown in blue in Figure 2) is via that of least resistance. The total length of each run of pipe would in this case be 465km. An alternative would be a shorter route over a more jagged terrain (shown in white), reducing its total length to 350km. But this would mean traversing more challenging terrain, especially if scores of large-diameter pipes were to be laid. Figure 3 shows another alternative to direct piping; water is pumped from the Gulf for 120km to a height of 543m (magenta) and allowed to flow freely downhill to the plains (dotted yellow), forming a reservoir shown here with a surface elevation of 372m (aqua blue), then pumped over to Lute again, either via a longer, gentler route (dark blue) for another 177km, or the more jagged route (white) for another 54km. This option requires less piping but more pumping.


Environmental Impact
Drastic alteration to the natural environment such as proposed here puts in jeopardy its delicate balance. Forces of nature which for millennia have existed in relative equilibrium are upset and new forces introduced. We would like to believe in this case that all will be for the better. But that would be naïve. It would be equally naïve to try and predict the exact process of change. The best we can do is to propose some possible outcomes.


More Precipitation
The interior of Iran suffers from a phenomenon called the ‘rain shadow effect’ (Figure 4). As it rises to the top of a mountain range, warm moist air expands and cools to become dew. At this point moisture condenses onto the mountain and precipitates atop the peaks and on the windward side. After forming rain the air continues to rise, advancing over the mountain and then descending into the valley. This air again warms, resulting in a rising ‘dew point’, and absorbs whatever moisture is available on the leeward side of the mountain to create an arid region. Introducing a 160,000-square kilometre lake to the interior may offset the rain shadow effect by re-moisturising the air, thus increasing rainfall on the southern side of the Alborz and eastern side of the Zagros Mountains.

Another phenomenon which may result in increased precipitation is the ‘lake effect’ (Figure 5). Air moving over a large enough body of water where the blowing air temperature is at least 13?C cooler than water-surface temperature results in precipitation as snow or rain. Although we cannot predict the water temperature of the proposed lake, given the region’s present hot climate it is reasonable to assume the water will be quite warm. If cold westerly winds continue to blow over the proposed waters, ‘lake effect’ precipitation is a definite possibility.


Less Thirsty Land
There is one more way in which a large lake may help soil and moisture levels. The plateau lands of Iran are ‘thirsty’, meaning water flows down slopes and seeps rapidly into the ground. Steep mountain slopes act as a funnel, channelling rushing rainwater and melting snows past needy lands and into the two desert bowls. Water tables are mostly hundreds of metres underground, making well-water irrigation costly and unreliable. Inevitable ground-water seepage from the proposed lake will reduce the thirst of soil deep below and for hundreds of kilometres around the lake, possibly resulting in higher water tables and/or less seepage over the rest of the plateau.


New Land Use
Increased rainfall might lead to more and more previously barren land becoming available for agriculture. Thirty-one trillion cubic metres of nutrient-rich water from the Persian Gulf also offers potential for aquaculture; the benefit of planning a marine environment from scratch is an added bonus. The sea can provide a vital source of food and exports. The 160,000 square kilometres of new water surface in the centre of the country might moreover be used for inexpensive marine transportation from all shores. And, last but not least, 6,000 kilometres of seashore presents opportunities for recreational activity. Development along these shores will also spark major activity (and challenge).


Risks and Dangers
There are two potentially catastrophic dangers: earthquake and flood.
Earthquakes are unpredictable and it is uncertain whether they might be triggered in this case. Thirty-one trillion cubic metres of water weighs 31 trillion metric tonnes; it is hard to determine whether this might increase crustal stability or cause earthquakes. But flooding is almost certain in this scenario: more precipitation will lead to increased run-off waters and more floods. What is hard to predict is their frequency, amplitude and impact on population. The way the people of Iran have chosen places to live over the millennia is almost like a bargain with nature. They live near enough to where water runs to use it, yet far enough away to suffer no more than once a generation from floods. Increased flooding will upset this equilibrium. People will either have to move to higher ground around valleys and wadis, or come up with ways to protect themselves from more frequent and bigger floods.