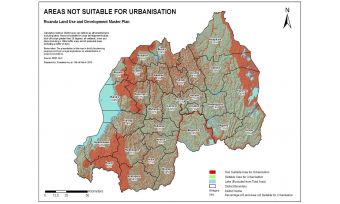 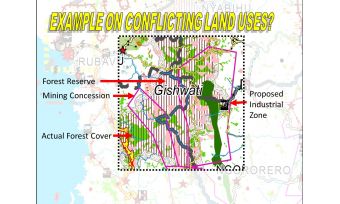 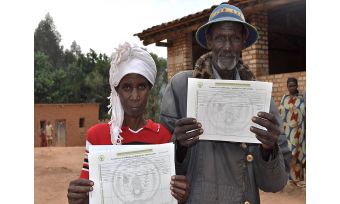 Access to land and other natural resources is an important basis for the livelihood of underprivileged people around the globe. Access must be stable and secure if it is to provide an opportunity for economic growth and incentives to invest. The use of land must be appropriately planned to ensure sustainable development and to pay respect to finite natural resources. Land administration agencies are charged with implementing land policies, such as planning for sustainable development, providing equitable land distribution and acting in accordance with the legal framework for land governance. Transparent and efficient land administration is a condition for economic development. In Rwanda, geographic information systems (GIS) have played a major role in the process of implementing a functioning land information system (LIS) and formulating a National Land Use and Development Plan (NLUDMP).

Rwanda has, in an African context, shown significant results to promote good land (and water) governance. Land is scarce and a prime resource in Rwanda, one of the most densely populated countries in Africa. Consequently, good land governance is essential to Rwanda achieving its ambitions to transform to a prosperous, food-secure and knowledge-based economy, to manage a sustainable environment and to create equal social conditions. Besides implementing the nationwide land tenure regularisation (LTR) component of good land governance, Rwanda has strived to achieve a consistent approach to combine land administration and land use planning at both national and local level. Rwanda Natural Resources Authority (RNRA), an authority that promotes the management of natural resources (land, water, forests, mines and geology), took the lead in these activities.

Geoinformation as a foundation

Geographic information systems (GIS) played a major role in the process of implementing a functioning land information system (LIS) and formulating a National Land Use and Development Plan (NLUDMP). At local level, land professionals were encouraged to take ownership of GI technology and a straightforward planning process was created with active public participation.

The first step was to provide updated and renewed geospatial data. Aerial photographs were produced for 96 percent of the whole country and satellite images were produced for the remaining 4 percent. Thereafter, digital orthophotos with a resolution of 0.25 metres were created using the photographs. The high-resolution orthophotos were instrumental in the preparation of the NLUDMP and in the LTR process. In addition, the images were used to produce base maps at 1:50 000 covering the entire country. The base maps were also used by other sectors for many purposes as well as to generate the first district land use plans (DLUPs).

In the LTR programme, nationwide systematic land registration started after piloting in 2009. The goal was to provide legally valid land documents to all rightful landholders and the programme was completed in 2013. A general boundaries approach was applied and data was collected in a highly participatory manner using the orthophotos. Teams of locally recruited and specially trained ‘para-surveyors’ outlined the parcel boundaries on the imagery printouts that were scanned, georeferenced and digitised. Printouts of the parcel plans became part of the legal parcel ownership document. The non-spatial data relating to owners’ rights and particulars were captured in claim registers by legally constituted adjudication committees. The information from the registers was entered into the land tenure regularisation support system, from which titles were processed and printed for first issuance. A land administration information system is used for processing transactions and for updating the register. By May 2013 about 11 million parcels had been registered and 9 million printed land lease certificates had been issued. The unit costs were about USD6 per parcel. It is interesting to observe that less than one parcel in 100 had a dispute registered against it. Where disputes did exist, 80 percent of them related to intra-family matters.

The NLUDMP, among many other components, introduced National Binding Directives to be adhered to by central and local governments, private sector and the general public as regard to land use changes during the planning period. The demarcated areas and hubs of national interest on the map presenting the final plan (1:250,000) determine and designate the location and/or nature of guiding and binding land use development from 2010-2020. They indicate that the specified land use has the highest priority in the concerned areas and that other land uses have to respect that. The national sector (strategic) plans, (integrated) district development plans and urban development plans must explicitly show that they have observed the guiding and binding aspects of the plan and the associated reasons.

The NLUDMP was the subject of a rigorous consultation period involving central and local governments, private sector and the general public. Being the first of its kind for Rwanda, the 2010 version of the plan became a testing ground, especially with regard to implementing the directives at local level through the introduction of the DLUP in 2013.

The plan also revealed abnormal expansion of Kigali City and presented an approach for sustainable urbanisation. That formed the incentive for what has since been developed into the Secondary Town concept. Furthermore, it observed the importance of densification, mixed use development and mixed housing and provided examples of how to manage these issues.

Once the NLUDMP had been adopted by parliament in 2012, the next challenge was to inspire and direct cross-sector and local planning and to stimulate actual land use changes and building activities. A project was launched with a proposal for a land use plan component in the district development planning and skills development of land professionals to prepare such a plan using GIS. The DLUP could be seen as an ‘implementation tool’ to ensure that areas and hubs of national interest would be respected at local level. At the same time it enables districts to analyse locally initiated development projects with spatial implications.

The training programme that ran in 2013 was unique for Rwanda. The participants, who were land use professionals at district headquarters, were not primarily focused on obtaining a certificate but rather on preparing a draft of a DLUP. All 30 districts were able to produce a draft during the training. These drafts formed the basis for a process of consultation – at both central and local level – which eventually resulted in a final draft for adoption by the District Council and approvals by the Cabinet.

Geographic information is embedded in over 80 percent of all goods and services the district provides. By visualising the existing situation of public service delivery and environmental promotion at local level, the DLUP has made it easier to analyse and measure performance against many of the national Vision 2020 objectives in terms of targets that have a spatial implication. This is illustrated by the example below.

The Vision 2020 has an indicator related to student/teacher ratio:

The map shows which schools (red or yellow symbols) in this district still have a long way to go to meet the Vision 2020 targets and can therefore help to optimise the allocation of resources.