Reaching every household in Nigeria 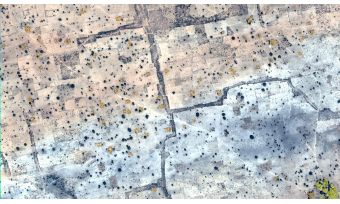 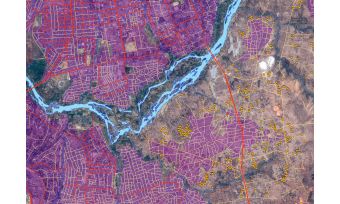 In September 2015, the World Health Organization announced that there had been no cases of wild poliovirus in Nigeria since 24 July 2014 and a full 12 months had subsequently passed without any new cases. That is extremely good news. Nigeria was one of the world’s three remaining polio-endemic countries and 122 new polio cases were identified in 2012. To achieve full eradication, a fast and exhaustive vaccination programme was implemented. To reach every child in the country, the campaign was optimised using Pléiades satellite imagery. Mapping settlements based on that imagery fostered more efficient organisation of the massive deployment of health professionals.

Polio, or infantile paralysis, was claiming many victims in Nigeria. As part of the Global Polio Eradication Initiative various non-government organisations (NGOs) put their weight behind a large-scale vaccination campaign, since every child needed to be vaccinated in order to put an end to the virus once and for all. eHealth Africa, an NGO that is headquartered in Nigeria and works across West Africa, came up with a plan to improve the effectiveness of the vaccination campaigns of UNICEF, the World Health Organisation (WHO) and the Nigerian government based on geoinformation technology. This was the challenge undertaken by Airbus Defence and Space and GIM, a Belgian company specialised in processing very-high-resolution imagery for urban applications, in partnership with eHealth Africa.

GIM was commissioned by eHealth Africa to map the whole of the Nigerian states of Kaduna and Bauchi. The vast area, comprising 100,000km², posed a huge challenge, as did the great morphological diversity of the features that needed to be automatically extracted from the images: urban areas, villages and settlements, paved roads and paths, waterways, lakes, etc.

Project partner Airbus Defence and Space was able to cover the whole area in record time. The very-high-resolution satellite imagery from Pléiades served as a basis for mapping the various features automatically using object-based image analysis (OBIA) techniques. eCognition software was used to complete the work in the space of less than six months.

The Pléiades constellation is meant to maximise coverage in cloudy areas despite poor weather conditions, which was the case in Nigeria. In a record time of one month, the first cloud-free cover of an area measuring 50,000km² was collected by Pléiades. This was then extended to a total of 225,000km².

This record achievement was possible because the lead time between a tasking request and image acquisition has now become very short, thanks to Pléiades but also to the SPOT 6 and 7 satellites. Work plans are uploaded to the satellites several times a day by two stations around the world, meaning that tasking requests can be submitted up to two hours before entering into a new tasking area. These multiple work plans per day are a major improvement compared to previous satellites.

Inaccurate weather forecasts contributed to a low success rate in acquiring data over some areas. However, this was improved by the capacity to update the cloud prediction models four times a day instead of one, which enabled mission plans to be adapted accordingly. It also enabled last-minute opportunities to maximise the collection of cloud-free images. As a result, the ratio of images collected with less than 10% cloud cover doubled from 30% to around 60%.

Apart from the collection capacity of the Pléiades satellite constellation and its very-high-resolution products, the success of projects like this also depends on effective collaboration between the project partners, and that was definitely the case during this initiative in Nigeria.

The main difficulty that GIM faced while processing the imagery was the diversity of the landscape. The landscape changes dramatically as one moves from north to south and there were big differences, not only between Nigeria’s states but also within those states. For that reason, the processing trees in eCognition needed to be adapted depending on the area.

A second challenge was to extract urban areas – especially hamlets – from bare soil, specifically in the northern part of the state of Bauchi which consists mainly of desert. The eCognition software performs image processing and feature extraction based on OBIA techniques. It uses not only spectral information (pixel-based image processing) but also texture, shape and neighbouring objects (contextual information). Ancillary data (Lidar, GIS layers) can also be used in the image processing. It offers the possibility to create processing chains, giving a high degree of automation, and the output can be in GIS layer format (vector).

eCognition was therefore used for the extraction of urban areas (as objects) and dividing them into different types depending on their size (number of houses and total area). The urban areas were classified into three different types (hamlets, small settlements and built-up areas). Besides the urban areas, details of the road networks and the bodies of water were also extracted.

Once the GIS layers were ready, the neighbourhoods to be vaccinated were divided into 50m² grids superimposed on the satellite image. GPS-enabled smartphones recorded the movements of the vaccination teams, with green squares showing visited areas and red squares showing missed ones. GPS tracking of teams also reduced the likelihood of data falsification since the coverage was being monitored in real time. eHealth Africa and its partners were sure that no village – however small – would be overlooked in Kaduna and Bauchi. They could determine the precise location of extremely remote villages and households where children needed to be vaccinated for the first time. Thanks to the satellite maps and their GPS-enabled smartphones, the health workers could see where they were in real time and ensure they visited each and every house. The GPS maps also improved the efficiency of their vaccination routes.

The campaign in Nigeria was very successful, but the absence of new cases does not mean that the situation no longer requires attention. Vigilance must be maintained to ensure that all children receive polio vaccines, perhaps even for the fourth or fifth time, as certain strains of polio are resilient. WHO only declares a country completely clear of the disease after three full years with absolutely no trace of the virus among the population and/or in the environment. Surveillance systems remain alert to polio viruses and vaccination campaigns must be continued.

Airbus Defence and Space has therefore launched speculative acquisitions over northern Nigeria, where the virus used to be prevalent, in order to be ready to deliver fresh data as soon as needed. Pléiades has completed the coverage of 178,000km² in this region. With these ever-fresher images of such high resolution, local organisations will be able to optimise their physical interventions for environmental sampling by knowing where to focus and by obtaining high-standard support for those missions. Furthermore, the Nigerian experience suggests that geoinformation projects like this could bring relief in similarly remote, poorly mapped areas of other countries. Likewise, by adapting the parameters, it is possible to transfer the chains for processing big data from space in a limited amount of time, to enable the extraction of any feature type in any type of landscape.

Frédérique Coumans is contributing editor for GIM International. For more than 20 years, she has been covering all aspects of spatial data infrastructures as editor-in-chief of various magazines on GIS, data mining and the use of GIS in business. She lives near Brussels, Belgium. 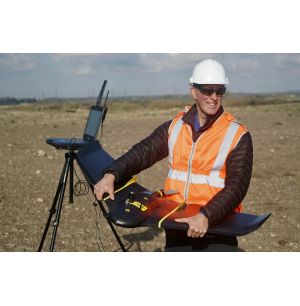