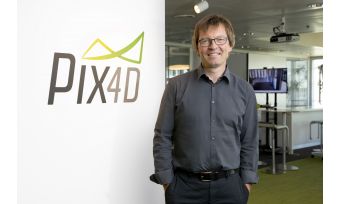 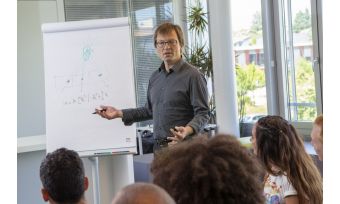 Christoph Strecha, founder and CEO of Pix4D, reveals that he foresees big changes in the geospatial industry in this interview with 'GIM International'.

Over the past decade, photogrammetry from unmanned aerial vehicle (UAV or ‘drone’) data has proven itself as an effective method to capture high-resolution aerial imagery, while drones have demonstrated their value for mapping and surveying professionals as platforms for carrying payloads that include a variety of sensors. One of the leading developers of software solutions to convert the imagery into high-end geospatial solutions is Pix4D, which has established itself as a leader in the business. Christoph Strecha, founder and CEO, talked to 'GIM International' and revealed that he foresees big changes in the geospatial industry.

Your company was started in 2011 as a spin-off of the prestigious École Polytechnique Fédérale de Lausanne (EPFL) in Switzerland. How would you describe your company’s journey since then?

We started based on a product that was the result of ten years of research. I think that we were one of the first to say that you could do automatic structure-from-motion photogrammetry. In view of the hype around drones and their development, it was the perfect time to bring the product to market. From that point on, we’ve continued to grow, continued to receive good feedback and generate a high level of interest. We’re doubling our team every year and I’m convinced that we have contributed a lot to the acceptance of drone mapping in the professional arena.

How would you describe the state of the geospatial industry at the moment?

There used to be a time when the geospatial industry was dominated by experts. They used very expensive high-level equipment to create maps and survey large areas that were just out of reach of smaller companies and communities. That has started to shift over the last three years, and it’s an ongoing process. Now, survey equipment in the geospatial industry can be used by people who have much less experience – they can basically use technology as a tool to solve their problems. This opens up a lot of opportunities in new sectors of the industry, because as prices are coming down, things are getting easier and becoming more automated. I think a big change is happening. And while we like to think we’re playing a part in disrupting the industry, the change is not just from coming Pix4D, but also from the big surveying companies as their equipment is getting cheaper and being used by a wider public.

You started to verticalise your products a couple of years ago. Which emerging markets is Pix4D focusing on today?

Today we are focusing on enterprise solutions. I think more and more large companies are keen to use photogrammetry in their workflows, because they’ve seen that this approach is something that will actually save them money. We’re focusing on bigger clients, which means customised solutions that we integrate with their complex workflows. Another focus is agriculture, where drones can be a big help in terms of crop analysis. For farmers and agronomists, we’re building solutions that are easy to use and will also save them money. We recently launched Pix4Dfields from our Berlin office, for example. Lastly we are focusing on construction, where surveying is already common practice but also very expensive and therefore not done on a regular basis. So with drones and 3D modelling we can help construction companies understand the progress of their construction sites, optimise workflows and use this information in their planning. Even if they cannot regularly fly a drone, as is the case in many situations, our Crane Camera solution can deliver aerial images with the same results.

As you mentioned, verticals are something we’ve been focusing more on in the last few years. The growth in verticals is proof of how the drone market has grown as a whole, as there is now a need for specialised software for each industry.

In view of the growing number of photogrammetry software solutions for drones, what are the main points surveyors should take into consideration before purchasing?

As I stated before, I believe that end users will be using these tools more frequently, so ease of use and good support are more important than ever. There is also an increase in the number of surveying companies using drones, but the growth among end users is considerably higher.

Surveyors will have a vast number of drones to choose from, fixed wing or copters, and they should know which one to use for which jobs to optimise their surveying. Having RTK on a drone also saves you from having to measure additional GCPs (ground control points, Ed.), for example, so surveyors should choose an RTK-equipped drone. That’s a huge gain in efficiency. Solutions are quite easy to find these days, but there are a number of things to take into account. Surveyors should look at not only the software, but also the solution surrounding it. What is the support like if something goes wrong? Has this software been used by others in the same field to get great results? Can an end user pick up and work with the software if need be? And, finally, does the software come from an established company, so the surveyor can expect updates and support in the years to come?

There is increasing focus on the payloads of UAVs. Which key trends do you foresee?

I think we can expect to see more optimised payloads with better cameras offering better resolution, rig systems and systems of combined-perspective cameras that increase the efficiency. Then we have the trend of multispectral sensors combined with thermal sensors and RGB. There’s also a lot of hype about Lidar, but it still remains a niche part of the market. It reduces the flight time of the drone, but it also dramatically increases the price of the equipment and the complexity of the workflow, so it just doesn’t have the same advantages as photogrammetry. I’m not sure that this technology will become mainstream in the workflow of surveyors and end users in the same way that rig systems and combined cameras will become mainstream over the next few years.

Pix4D is known for its R&D efforts in collaboration with EPFL’s computer vision lab. Is this still an important pillar of your company?

As a tech company, at Pix4D we invest heavily in technology to improve our algorithms, and we collaborate with EPFL and many other universities. But we also push a lot internally for research to see how we can add more value for our users, so we’ve established a much larger R&D effort to serve our clients.

Artificial intelligence (AI) and machine learning are likely to play an essential role in the future of drone mapping. Is Pix4D ready for the future in this sense?

I don’t think anybody is really ready today, but we are investing considerably in that direction and I’m hoping we can do much more in this area. We are very focused on increasing the AI capabilities of our algorithms in combination with the photogrammetry that Pix4D already handles very well. Regarding AI, we presented a desktop product at last year’s Intergeo that uses machine learning to automatically classify point clouds into different classes. I believe we were the first company in this field to present the use of AI in that way. This is a very important topic that we will continue to explore, because actually it’s not the 3D model itself that matters, but rather the automatically extracted information that creates much more value than the 3D data.

Drones are becoming cheaper all the time, so is this increasing the number of potential customers?

Definitely. As drones become cheaper they become a standard tool for end users in their workflow. We are also focusing on making the software easier to use, so it can be used by more people. We believe that the combination of easy and dedicated verticalised software with cheaper drones is key to market growth.

You once said “A drone should be seen as a device”. So, turning our attention to another device, what are the latest developments with respect to Pix4D’s Crane Camera solution?

A drone is a very handy way to get a camera in the air and to acquire images from positions that are needed in order to build 3D models from interesting viewpoints. But flying one can still be somewhat disruptive to a workflow, and of course it requires a pilot. At Pix4D we think it’s not the drone that is most important, but rather the position of the sensor while acquiring images. The Crane Camera is a very nice illustration of that. The crane moves, taking images from different viewpoints, which is what the technology requires. It’s a trend we’re seeing more and more of: more cameras being used – both moving such as in cars and trains, and static such as in cities, stadiums, airports and so on – to extract information from reality. This is the core of Pix4D’s business. It might not be the most important thing, but today a drone is a near-perfect tool to obtain the viewpoints needed to extract the information.

Building information modelling (BIM) is seen as an intriguing opportunity for surveyors. What are your thoughts on this?

This goes together with converting raw images, not only into point clouds or meshes but also into information. A mesh doesn’t have much more value than the original images. Automatically understanding what this mesh represents – what is a simple structure, what are semantic structures – that’s where the value lies, because it means there’s no human operator needed to extract the semantic information from the 3D model. BIM is a good example of how this concept of converting images to information can be applied and is extremely useful.

Which next steps can we expect to see on the processing side?

As I mentioned, machine learning will be a huge change for the industry. Companies will put a lot of effort into analysing the data in a semantic way: not just presenting images, but really extracting information from them. The standard processing workflows are working really well, although there’s always the need to process faster – it’s important to keep updating that, which is a focus for us. But that won’t be a revolutionary change, at least in the short term. What we can expect is to apply photogrammetry, machine learning, geometry and radiometry from images in particular industries. That’s where we’ll see most of the developments in image processing in the future.

Lastly, what would be your message to the community of mapping and surveying professionals?

I think it’s very important that everyone who works professionally with UAVs embraces public opinion positions on privacy and security issues regarding flying with drones. All the companies in the sector, whether they are software companies, hardware companies or surveyors that use drones in their work, need to work together towards a clear public definition of drones as an essential professional tool – one that can be fundamental in emergency response situations like earthquakes, for example. Drones have many useful professional applications that have nothing to do with spying on your neighbours, flying for fun or military applications. The general public needs to be made aware of the pros and cons of drone usage so that legislation is put in place correctly, in order to allow drones to be used where they add value to our society.

Dr Christoph Strecha is the CEO and founder of Pix4D, a Swiss company which develops and markets professional photogrammetry software. Dr Strecha received a PhD from the Catholic University of Leuven (Belgium) in 2008, completing his thesis on multi-view stereo. He has authored numerous papers and in 2015 received the Carl Pulfrich Award for his work in computer vision and photogrammetry. He is recognised by the scientific community as an influencer, trendsetter and advocate of modern approaches to photogrammetry.