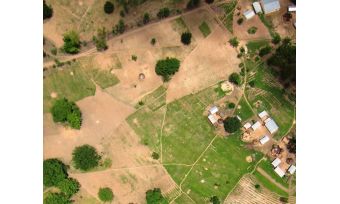 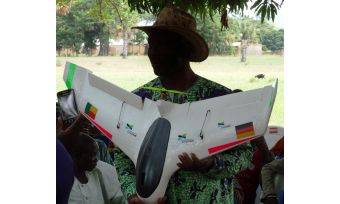 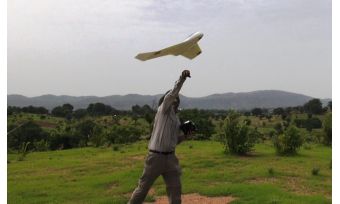 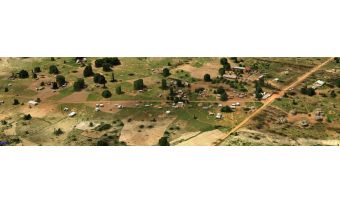 When conducting surveys in countries near the equator, environmental conditions can be harsh. Heat, dust and humidity may disrupt sensitive equipment, while distrustful locals may obstruct the undertaking. Read on to learn about the experiences during a UAS survey on the savannah of Benin, West Africa.

Germany-based Spectair Group offers multiple aerial services including video recordings from unusual perspectives, support services to police, firefighters and rescue teams, inspection of industrial plants, solar roofs and buildings, and mapping and surveying services. In July 2014, the company was commissioned to conduct a UAS survey to produce orthoimages and 3D landscape models of a peri-urban savannah area of 20km2 in Benin, West Africa. Before advancing urbanisation, this was an agricultural area. Today, many parcels are unused and awaiting urban development (Figure 1). The survey was an initiative of AFC Consultants International and carried out as a bilateral project between the Benin Ministry of Agriculture through the FI-ProAgri investment and funding programme and the German Ministry for Economic Cooperation and Development.

One of the tasks was to create a cadastral plan delineating property boundaries to secure the rights of peasants. The agricultural plots are cultivated by individual peasants and their families. The peasants do not own the parcels but have a right to use the land based on customary law. The land is owned by the community the peasants form part of. The rights are not formalised in registers but are instead memorised by the elders and chiefs and passed down from one generation to the next orally. Now, as urbanisation advances, land value is steadily rising and strangers are settling in the midst of formerly close-knit communities. The Benin Ministry of Agriculture set out to transfer the peasants’ land use rights into property rights to provide tenure security. It was decided to delineate land use and property boundaries on orthoimages acquired by UAS.

A fixed-wing UAS – wingspan 1.18m – equipped with a 12MP Canon 220-HS camera and a GNSS receiver was chosen to conduct the aerial survey (Figure 2). The weight including camera is 1.2kg and the maximum speed is 90km/h. The battery capacity limits the maximum time in the air to 25 minutes. Surveys are usually conducted with a speed of 50km/h. In other words, during one flight, a 20km-long strip can be captured. In case of loss of signal from the remote control the UAS will navigate autonomously back to the launch site.

The maximum height difference of the slightly undulating terrain is 50m. The UAS flew autonomously following pre-specified flight paths. GPS initialisation before the start took about one minute. To guarantee safe flights and high-quality positioning, signals from at least six GNSS satellites must be tracked. During this survey an average of 13 GNSS satellites were tracked. One pilot took care of launch and landing (see Figure 3) while a second pilot assisted during the flight. 2,000 images were captured in five flights over the course of three days. For georeferencing purposes, 20 ground control points were established and measured with GNSS. The UAS flew at a height of 250m above ground level resulting in a ground sample distance (GSD) of the true colour images of 2cm. Using Agisoft Photo Scan Professional, a digital surface model (DSM) with a grid spacing of 4cm (although 10cm was requested by the customer) and an orthomosaic were created. By superimposing the orthomosaic on the DSM, a 3D landscape model was created (Figure 4). The vast amount of data was stored on a 2TB hard drive, which was secured in an external case. For taxation purposes a soil inventory was conducted. The entire project, from set-up of the survey to creation of orthomosaics and the 3D landscape model, took 10 days.

The approvals from the Ministry of Agriculture and the military were difficult to obtain. However, the biggest challenges were not so much related to legal permission, custom clearance and other regulatory issues but instead primarily concerned the harsh environmental conditions. Heat and dust are severe threats for the sensitive devices used in a UAS survey. The air temperature reached 55oC and the remote control and other devices reached temperatures of up to 65°C when lying in the sun. The shrink tubing covering the suspension brackets of rudders and ailerons had to be exchanged after every flight as it almost melted. Furthermore, the team faced some local resistance. Initially the indigenous people were not cooperative as they feared the imaging aircraft would bring evil into their community. It took the crew a day to convince the chiefs in the area that the survey would actually benefit the population.