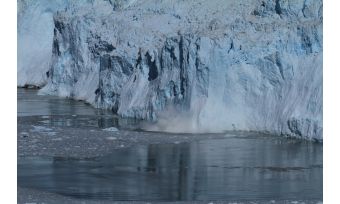 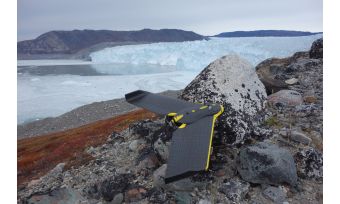 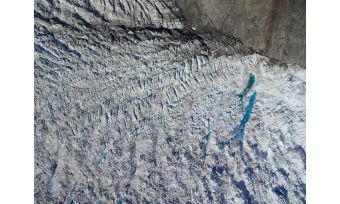 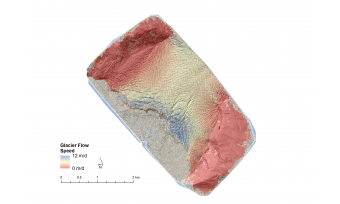 Mapping polar regions can be a challenging yet vital mission, helping scientists and researchers to better understand how the planet and its climate are changing. Traditionally, terrestrial and ground-based techniques have limited the scope of activity and the quality of data. In this article, the author discusses how unmanned aerial vehicle (UAV or ‘drone’) solutions have been used in Greenland to successfully monitor the formation of crevasses and the behaviour of ice flow on the Eqip Glacier, providing previously impossible levels of insight.

The status of polar regions has risen to the forefront of public awareness in recent decades, with rapid climate-driven changes to glaciers and ice caps capturing the attention of scientists and the general population alike. It has become increasingly important to gather data that can be used to gain a better understanding of these areas and the mechanisms behind their extreme transitions. However, in conditions that are amongst the most hostile on the planet, such missions can be challenging. The use of UAVs has proven to be instrumental in facilitating research in this area, not only helping to overcome significant safety and logistical challenges, but also providing greater insights for professionals in the field.

A research group at the University of Zurich led by Dr Andreas Vieli, head of glaciology and geomorphodynamics in the Department of Geography, has been using UAV technology to achieve just that at the Eqip Glacier (also known as ‘Eqip Sermia’), an outlet glacier of the Greenland ice sheet. Located in West Greenland, this ocean-terminating glacier is one of the island’s most active, with large chunks of ice breaking off at regular intervals every day (Figure 1). As part of a project funded by the Swiss National Science Foundation (SNSF) between 2015 and 2017, Dr Vieli and his associates collected data to monitor how the glacier geometry and ice flow speed evolved over time. The team aimed to use this data to investigate the formation of crevasses and the process of calving – the mechanism of icebergs breaking off into the sea – in order to improve the ability to predict the future retreat and mass loss of such marine-terminating glaciers.

Given the hostility of polar regions, historically it has proven difficult for research groups like Dr Vieli’s to map such terrains. Based on experience from similar projects, the team knew that traditional, terrestrial techniques like laser scanning or remote sensing methods using satellites would not be able to provide the breadth and quality of insights required. While satellite imagery offers a wide view of the terrain, the images captured are typically of low temporal and spatial resolution, making it difficult to obtain data that reaches acceptable standards for studying detailed processes. When using the terrestrial approach of laser scanning in the Alps, Dr Vieli’s team found that processing was often difficult and the resulting data was affected by shadows. In addition, such ground-based approaches are time and labour intensive – something ideally avoided in harsh, hostile climates like those found in the Arctic region.

Following these challenges with terrestrial equipment, and in view of the need to collect highly accurate data from which to create comparative digital elevation models (DEMs), Dr Vieli and his team concluded that UAVs offered the most effective and efficient solution. An aerial approach offered significant logistical and safety advantages, meaning the team could securely map a previously inaccessible side of the glacier and gather higher-resolution data on demand.

Having previously used the senseFly eBee drone in a range of projects, including in high Alpine environments, the team selected this integrated solution to map, and gather insights from, the Eqip Glacier (Figure 2). A fully autonomous, easy-to-use professional mapping drone, the eBee weighs just 700g and is capable of covering up to 12km2 in a single flight, enabling Vieli and his associates to be in the air within a matter of minutes. True-colour RGB payloads were used, with the Sony WX camera able to capture high-resolution aerial photography, creating accurate and detailed DEMs at decimetre resolution. In addition, the eBee’s pre-installed global positioning system (GPS) capabilities enabled the team to avoid the necessity of compass navigation and therefore minimise the impact of the weak magnetic field in Greenland.

A total of six flights were required to create one DEM of the entire glacier tongue, and this process was conducted eight times between 2015 and 2017. Prior to each flight, the in-built eMotion software allowed the team to assess the feasibility of the project, plan their flight route and load elevation data in advance, helping to streamline processes and optimise the time spent analysing data. With such a challenging environment to navigate, the team had to consider weather conditions and altitude in the area surrounding the glacier ahead of the flight. For instance, as the glacier is only accessible on one side, if winds blow the drone too far out of reach it may not be possible to retrieve it. In addition to potentially impacting the safety and success of operations, the limited accessibility also had a knock-on effect on the team’s ability to establish ground control points (GCPs). However, prior flights in the area meant that some GCPs had been previously established and could be used in this mission.

To map the 20km2 calving front area of the Eqip Glacier, one to two members of the research team were deployed to the site for each DEM acquisition mission. Missions were repeated every four to five days depending on weather conditions. With an average time of 25 minutes per flight, Dr Vieli and his team acquired a total of 625 images across the six flights (Figure 3). This data was first processed using Pix4DMapper software to create the highly detailed DEMs and subsequently used to derive elevation change maps. In addition, the research team’s own cross-correlation software used the data to monitor how the flow fields on the glacier’s surface evolve year on year. From this analysis, the team found that the glacier is flowing 12m a day – a significant speed – and obtained new insights into the structure of the flow field which, ultimately, will help them to better understand the process of calving (Figure 4).

Using the senseFly eBee as part of an integrated, end-to-end approach, Dr Vieli and his team from the University of Zurich were able to collect highly accurate, professional aerial data of the Eqip Glacier in under three weeks in each year of the project – a feat which would have been impossible using alternative satellite imagery or terrestrial techniques. The data collected using the eBee has already significantly contributed to furthering the team’s research, complementing additional lower-resolution satellite imagery, to provide a comprehensive view of the area and the acting processes. With more UAV flights scheduled for the summer of 2018, the team also has future plans to extend its research to mapping debris-covered glaciers in Alpine terrain using innovative thermal camera mapping technology. Having access to these detailed, integrated insights will help the team continue to broaden their understanding of some of the most remote, hostile environments on the planet.

All images are courtesy of the University of Zurich.