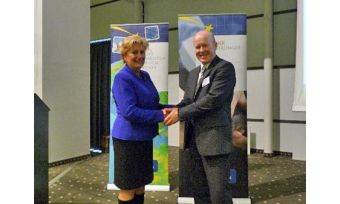 The 9th General Assembly of EuroGeographics, the association for Europe's national mapping and cadastral agencies, took place in Vilnius, Lithuania. It was hosted by the National Land Service under the Ministry of Agriculture and State Enterprise Centre of Registers in Lithuania. Keynote speakers from the European Commission's Eurostat and GMES Bureau addressed 120 participants, representing 52 members from 43 European countries.

The title of this year's event was ‘Developing a location framework for Europe'. National Mapping and Cadastral Agencies (NMCA) will play a major role in providing the location framework for INSPIRE, GMES and other European initiatives by enabling decentralised access to harmonised core geographic datasets from all European countries.

The vision to build a common standard for NMCA products and services, championed by EuroGeographics in the ESDIN project, was echoed by the vast majority of attendees.

At the end of a very successful three-day conference, the outgoing President of EuroGeographics, Magnus Gudmundsson, who held the position for the last 2 years, summarised: ‘Our biggest achievement in underpinning the location framework for Europe is through the creation of our pan-European products: EuroBoundaryMap, EuroGlobalMap, EuroRegionalMap and EuroDEM, but we have to respond to current expectations by developing services to eventually replace our products. The first step along this path has been the creation of the EuroGeoNames web-service, which was successfully completed in January 2009.'

Dorine Burmanje, the EuroGeographics incoming President, added: ‘‘It is our responsibility to provide core geographic datasets for Europe which can be relied on for essential decision making, emergency planning, and sustainable development activities across Europe'.

The successfully completed eContentplus EuroGeoNames project has been praised by the assessors and is now in the implementation phase. Eleven countries have already connected their National Gazetteers making this the most comprehensive source for official place names and their variants for Europe. At the General Assembly many more Members have committed to include their data.

‘The pan-European products, created by the members of Eurogeographics, are an important background for many of our statistics and analysis. There is a long tradition of our close cooperation', stated Daniele Rizzi from Eurostat, ‘and we have to continue in this trend by achieving a full coverage of Europe and improving the data quality based on users' requirements'.