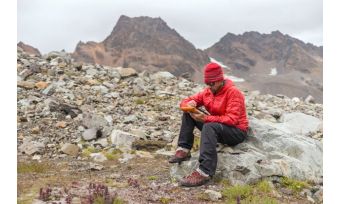 Juniper Systems’ Archer Field PC was recently used to measure the elevation of a never-before-climbed peak in the remote Myanmar Himalaya. The peak, Mount Gamlang Razi, has historically been known as the second highest peak in Southeast Asia, but a joint American/Myanmar-led expedition set out on a mission last September to prove that it is in fact the tallest.

Standing at a reported 5,881 metres tall, Mount Hkakabo Razi has long been known as Southeast Asia’s highest peak. In recent years, however, the legitimacy of the elevation of Hkakabo Razi has come into question. Current digital analysis suggests that initial surveys of Mount Hkakabo Razi were overstated and its actual elevation is as much as 100 metres lower than originally believed. At the same time, digital analysis suggests that virgin-peak Gamlang Razi may in fact be the taller peak. This controversy prompted Idaho-resident and experienced climber Andy Tyson to lead an American-Myanmar expedition team on a three-week approach through almost 250 kilometres of cobra-riddled, mosquito-infested jungle, and from there up to the very peak of Gamlang Razi to measure its elevation in person.

But first, Tyson would need a device that could accurately record the elevation at the summit, while being able to withstand the extreme conditions of both the hot, wet jungle and the frozen mountaintop. With this in mind, Tyson approached Juniper Systems in request for a top-of-the-line rugged handheld. In response, Juniper Systems provided the team with an Archer Field PC with Hemisphere GPS XF101 receiver and training to record the GPS data they needed.

Not Ready to Accept Changes

After a 35-day journey, Tyson and the team successfully reached the summit of Gamlang Razi, with the Archer Field PC in hand. After collecting GPS data at the top, the data was sent via satellite phone to Juniper Systems for analysis. After post-processing the data against terrestrial base stations in Lhasa, Tibet and confirming the results with Effigis in Montreal, Canada, Juniper Systems concluded that the elevation of Gamlang Razi was 5,870 metres, plus or minus 2 metres. This suggests that Gamlang Razi is taller than nearby Hkakabo Razi by approximately 112 metres and should be considered Southeast Asia’s new highest peak. However, there are many – particularly natives to Myanmar – who are not ready to accept changes to Hkakabo Razi’s original elevation measurement. This was made apparent in a letter Myanmar’s president, Thein Sein, wrote to Tyson and the team after their successful summit, congratulating them for summiting Southeast Asia’s second-tallest peak.

Juniper Systems congratulates Andy Tyson and the team for a successful summit of Gamlang Razi, especially for collecting data that seems to support his and others’ recent claims that Gamlang Razi is the tallest peak in Southeast Asia, said Trevor Brown, natural resources market manager at Juniper Systems. They enjoy hearing stories like this, where their handhelds are put to the ultimate test of ruggedness and reliability, and come out performing exceptionally.

Tyson remains firm in his assertion that Gamlang Razi is the country’s highest peak, but some have suggested that the debate may not be over until someone actually climbs Hkakabo Razi and measures it in person. Juniper Systems said they have a handheld for the job, should that time come.