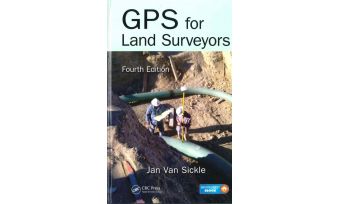 In June 2015, CRS Press released the 4th edition of GPS for Land Surveyors written by Jan van Sickle. When reviewing this book, which is aimed not at researchers but at practitioners, Mathias Lemmens, senior editor of GIM International, was pleasantly surprised by the way the author leads the reader through the nitty-gritty and pitfalls of GPS. Read the full review here.

The 2nd edition of GPS for Land Surveyors was published in 2001 and the third in 2008. Apparently the revision cycle is seven years. The 4th edition starts with a chapter on the main features of the GPS signals which are broadcast in the microwave part of the electromagnetic spectrum. Page 1 gets straight to the point: “Millions of GPS receivers may monitor the satellite’s signals without danger of overburdening the system.” This distinct pro is accompanied by the burden that GPS positioning necessitates the gathering of abundant signals and advanced processing. After understanding the signals and how pseudoranges, ranges and positions are related to phases and codes, Chapter 2 clarifies that all this know-how is of little value when the surveyor does not grasp the bunch of errors introduced by satellite orbital biases, clock offsets, ionospheric and tropospheric delays, multipath and receiver noise and how to manage and (partly) eliminate these. Surveyors may complain that new technologies enable laymen to do the job, thus jeopardising their profession, but Chapter 2 elucidates that the profession is shaped not by technology but rather by knowledge and skills.

The modelling of GPS signals and the many error sources requires a lot of mathematics. However, formulas are just modestly scattered throughout Chapters 1 and 2 as the book aims to reveal the basics of GPS, receivers, surveying methods, survey design, planning and measuring without pages full of complex maths. The calculations seem more abundant than they actually are, since the pseudorange equation on page 27, with all the variables explained, is repeated on page 41 and the same is true for the carrier phase observable equation depicted on page 36. The equations are not numbered as this is a practical book “intended to be neither simplistic nor overly technical”. Chapter 3 first focuses on the historical evolution of GPS by discussing its forerunners. Next, the space segment including the effects of the distribution of the satellites along the sky on the quality of the position, i.e. dilution of precision (DOP), is considered.

The user segment is the subject of Chapter 4 which elaborates on receivers – categorised in recreation, mapping receivers and surveying receivers – and the methods to obtain positions from the complex observation data. Positions are expressed as coordinates in a reference system. Planar rectangular systems, 3D Cartesian coordinates, ellipsoids, geoid, map projections and the International Terrestrial Reference System (ITRF) are scrutinised in Chapter 5. This chapter demonstrates that the book is primarily aimed at readers from North America; it contains no less than three maps of the US. In Chapter 6, covering Static GPS Surveying, the practical part of the book starts: measuring in the field. Chapter 6 focuses on precision surveys in which the positions are calculated during post-processing most often applied in control work. But today “most common methods utilise receivers on reference stations that provide correction signals.” The corrections are transmitted by internet, radio signal or cell phone. When this is done instantaneously the method is called real-time kinematic (RTK) GPS, which is the subject of Chapter 7. The final chapter focuses on recent developments, including a comprehensive treatment of novel signals on new blocks of GPS satellites (L5 and L2C). Compared to the 3rd edition most of the content of Chapter 8 is new.

The book provides both ‘need to know’ and ‘nice to know’ information. Page 77, for example, explains the letter codes used to name the radar bands, introduced during World War II. As the 23cm wavelength used for search radar was long compared to the 10cm wavelength introduced later, it was called the L-band and the shorter wavelength became known as the S-band. The Germans used the 1.5cm wavelength which they called the K-band derived from kurz (‘short’). The wavelengths in between long and short were considered a compromise and hence called C-band. The first wavelengths used in radar were of metre length. They were not called XL or XXL but coded as P-band, derived from ‘previous’. The origin of X-band – wavelength 5cm – remains untouched.

I have never read the forerunners of this book, but this edition pleasantly surprised me. Last year I complained in this magazine: “It is becoming increasingly seldom that a textbook is written by one or a few authors… Today it is not unusual when 25 authors, or more, are involved… The topics covered are complicated and specialised.” None of that applies to this book. It is written by one author and aimed not at researchers but at practitioners. The author is not driven by impressing peers but is resolute in offering knowledge and skills to the reader. Indeed, the book has been written for land surveyors by a land surveyor, who has practised surveying for over 40 years combined with teaching at universities and institutes of technology. He is determined to lead the reader through the nitty-gritty and pitfalls of GPS. Often he further explains a subject with a follow-up sentence starting “In other words…” which is sometimes even repeated twice. Concepts are frequently explained by metaphors, e.g. the working of Kalman filtering is illustrated by comparing it to a car driver who interacts with the speedometer by depressing the accelerator. No formulas needed.