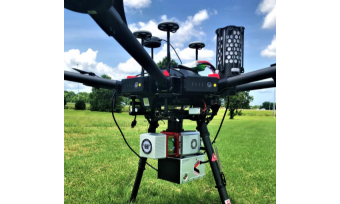 LidarUSA has announced the option of the Drone Rescue Systems parachute system with all DJI M600 UAV sales. As unmanned aerial vehicles (UAVs or 'drones') become increasingly common for mapping applications, the likelihood of a crash increases. The first concern for any pilot should be the safety of all people in the vicinity. Equipment safety is number two. Any mapping-equipped drone will have enough weight to potentially harm a person, even if falling from a low-altitude flight. The Drone Rescue system effectively mitigates this danger and gives pilots the added assurance that, should the system fail, they have gone the extra mile to prevent harm to any bystanders.

Weighing in at only 430g in a re-packable cannister of only 160x75mm (HxW), the DRSM600 is designed to autorelease using a patented, airplane-friendly, ejection mechanism within milliseconds of detecting a system failure. Effective as low as 10m with a descent of 3m/s, the equipment will land without a hard impact yet quickly enough to keep from being dragged far away.

"We performed our own tests of the Drone Rescue system to ensure the system really worked as advertised," says Daniel Fagerman, CTO of LidarUSA. "We weren't disappointed. While it's an expensive test if it fails, the good news is it that the system worked as well as could be expected. The M600 incurred very little damage that was easily repaired. We feel confident this will be more than just an accessory for our clients but rather a necessity.”

LidarUSA is pleased to offer this to any M600 owners. The size and weight are a major bonus when combined with the airplane-friendly feature especially for the busy traveler. Visit this website to one see one of the test flights.