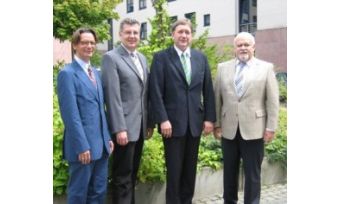 On 1st July 2007, the Surveying and Cadastre Authority of the German Federal State of Lower Saxony (LGN) announced the general technical acceptance of the Data Acquisition and Qualification component of the new standard for cadastre and topographic information systems in Germany, named AFIS-ALKIS-ATKIS. The core of this solution is LM on ArcGIS Editor from AED-SICAD's new land management product line, based on ESRI's ArcGIS technology.

The final installation is planned to include up to 1,000 desktop users of the LM on ArcGIS edit component ALKIS all over the Federal state, for production purposes. At the same time, the LM on ArcGIS edit component ATKIS will help to support the complete and integrated production of the base DLM (Digital Landscape Model) and DTK (Digital Topographic Map) data of the cadastre authority. At present, ALKIS is in pilot in the cadastre authorities of the Cities of Braunschweig and Syke.