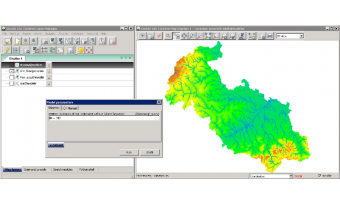 After many years of development, the new stable major release of GRASS GIS 7.0.0 is now available. The graphical user interface based on wxPython has been enriched with many new features in order to make complex GIS operations available as simply as possible. The old Tcl/Tk-based GUI has been dropped, and the developers have added important new functionality to the core system, including the new Python interface to the C library. This new API permits users to create new GRASS GIS-Python modules in a simple way yet while obtaining powerful and fast modules.

Furthermore, the vector library has been significantly improved to make it faster and more efficient, along with support of huge files. This required an easy-to-manage topology format update including a new spatial index. A lot of effort has been invested to standardise parameter and flag names. Finally, there is a series of new modules to analyse raster and vector data; some of the already existing modules have been improved and made faster (some even 1,000x faster).

The first release candidate GRASS GIS 7.0.0 ships 10,500 fixes and improvements with respect to GRASS GIS 6.4.0 after more than six years of development. As a stable release 7.0 will enjoy long-term support.

GRASS GIS 7.0.0 also offers drastically improved performance for many raster and vector modules: Many processes that would take hours now take less than a minute, even on an average laptop, explained Markus Neteler, the coordinator of the development team composed of academics and GIS professionals from around the world.

The Geographic Resources Analysis Support System (http://grass.osgeo.org), commonly referred to as GRASS GIS, is an Open Source Geographic Information System providing powerful raster, vector and geospatial processing capabilities in a single integrated software suite. GRASS GIS includes tools for spatial modeling, visualisation of raster and vector data, management and analysis of geospatial data, and the processing of satellite and aerial imagery. It also provides the capability to produce sophisticated presentation graphics and hardcopy maps. GRASS GIS has been translated into about twenty languages and supports a huge array of data formats. It can be used either as a stand-alone application or as backend for other software packages such as QGIS and R geostatistics. It is distributed freely under the terms of the GNU General Public License (GPL). GRASS GIS is a founding member of the Open Source Geospatial Foundation (OSGeo).