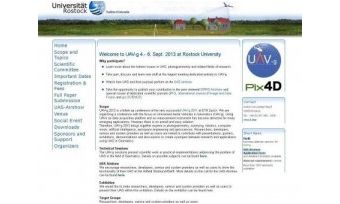 Pix4D, Switzerland, has announced it will be platinum sponsor of UAV-g 2013. This year's UAV-g will be held at Rostock University, Germany, from 4 to 6 September. The conference focuses on Unmanned Aerial Vehicles in Geomatics (UAV-g). UAV-g 2013 is the follow-up conference to the very successful UAV-g 2011.

Key ingredients of UAV-g 2013 are technical sessions, the AUS airshow and the exhibition. The event targets at researchers, developers, service and system providers as well as users. The official language for presentations and publications is English.

Pix4D is the developer of Pix4UAV, a software package that converts thousands of standard pictures, taken by readily available drones, into a professional georeferenced image and a highly accurate 3D model. Pix4D enables civilian UAVs as the next-generation mapping and surveying tool.

Visit the UAV-g website for more information on the event.