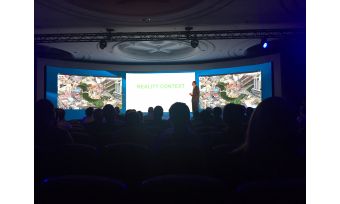 At Bentley System’s annual conference for infrastructure thought leaders, CEO Greg Bentley presented a keynote speech. He stated that since Bentley Systems’ acquisition and assimilation of ContextCapture software in 2015, the proliferation of reality modelling across users’ projects – and across Bentley’s software portfolio – guarantees that it will become a mainstream contributor to infrastructure project delivery and asset performance. Reality modelling describes the potentially continuous capture of infrastructure assets’ as-operated conditions for processing into engineering-ready reality meshes, and their 'enlivening' for immersive interaction.

To date, reality modeling has processed digital photos acquired from ground-level and/or aerial photography, and in particular from the burgeoning industrial use of unmanned aerial vehicles (UAVs). At the Conference, Bentley announced a significant breakthrough in ContextCapture planned to be available next month: available point-clouds from laser scanning can now be combined with available photos, as “hybrid inputs,” for reconstruction into a reality mesh. The advantages of reality modelling – in the case of laser scanning, the superior engineering-ready mesh result, compared to the bulky and unintelligent point-clouds themselves – are now compelling in every circumstance, across the range of scanner or camera devices, of asset characteristics, and of capture conditions.

Cited by Bentley for the mainstream embrace of reality modelling were the following observations:

Bentley Systems’ software developments to broaden reality modelling workflows which were demonstrated at the Conference include:

Greg Bentley thanked the constituents among users and industry partners who have demonstrated here at The Year in Infrastructure 2016 the benefits they have realised so far and their auspicious expectations, as reality modelling goes mainstream. He believes to go on to see reality modelling answering the question as to how drones, mixed reality devices, the industrial Internet of Things – and in fact, 'digital natives' – will converge to advance infrastructure engineers, project delivery and asset performance.