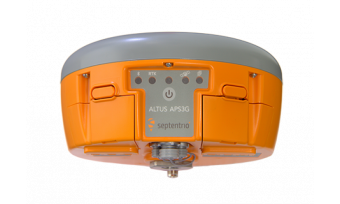 Septentrio has introduced its next-generation high-precision Altus APS3G RTK receiver, which – according to the Belgian company – brings technology only previously available in scientific receivers into the field for professional surveyors.

Built on Septentrio’s AsteRx4 engine, the APS3G tracks all-in-view GPS, GLONASS, Beidou, IRNSS, SBAS, Galileo and QZSS, including E6/L6, and all other signals known to be available in the medium term.

The APS3G incorporates Septentrio’s AIM technology with three notch filters for in-band jamming and chirp jammer resistance, ensuring the highest possible levels of accuracy and resilience under all conditions. This technology is well proven in Septentrio’s reference station and scientific products which are acknowledged as technology leaders and deployed by major research institutions all over the world.

The new GNSS receiver provides optimum GSM signal reception, as well as a built-in advanced UHF receiver for reliable performance on longer baselines, yielding real-time 25Hz RTK. It also supports TERRASTAR L-band corrections for sub decimetre-level accuracy. The flexible APS3G receiver can function as either a rover or base station, providing maximum versatility in the field.

The Altus APS3G with embedded AsteRx4 technology brings what has previously been available only in high-priced scientific GNSS receivers to the workplace of the average surveyor, Vancans added. With 544 channels capable of tracking all known and foreseen satellite signals and bands, the all-in-one unit is future proof, and Septentrio’s open architecture makes the APS3G compatible with most other hardware and software solutions, driving down the lifetime cost of ownership. With two hot-swappable batteries, the APS3G provides up to 14 hours of operation without recharging, maximising uptime in the field.