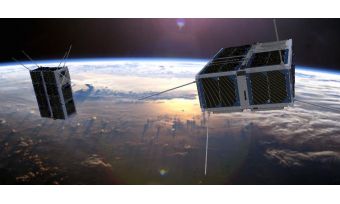 A constellation of small satellites that provide data on Earth’s ice and soil moisture content to complement the Sentinel fleet took the top prize at this year’s Copernicus Masters Competition. Now in its seventh year, the competition seeks new ideas for services, business concepts and applications based on Earth observation satellite data.

The vast amounts of data produced by Europe’s Copernicus programme and its Sentinel satellites open the door to countless products and applications in a wide array of business sectors. The awards ceremony took place yesterday in Tallinn, Estonia, in front of an international audience during European Space Week as part of the Satellite Masters Conference & Horizon 2020 Space Info Day.

Size of a shoebox

The winning idea, FSSCat, was designed by a joint team from Spain’s Universitat Politècnica de Catalunya in Barcelona and the Estonian start-up Golbriak Space OÜ and proposes a constellation of two CubeSats, each about the size of a shoebox. The two satellites would collect data to complement the Copernicus Sentinels and, in particular, to support the Copernicus Land and Marine Environment services using a state-of-the-art dual microwave payload as well as a multispectral optical payload.

As overall Copernicus Masters winner, the team was awarded a EU10,000 prize which includes a VIP trip to attend a satellite launch in Kourou. In addition, the team won the Sentinel Small Satellite Challenge, which offers EUR1million to design and build the two satellites within 12 months, along with free launch services and a cash prize of EUR10,000.

An additional 13 ideas were awarded prizes totalling EUR600,000 in the form of cash, consulting, data packages and other benefits. The winners also have the opportunity to ready their ideas for the marketplace at one of ESA’s 16 Business Incubation Centres across Europe.