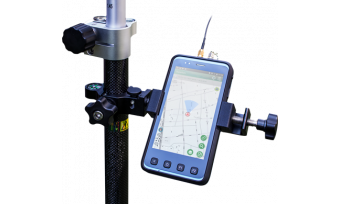 Directors of DataGNSS, a professional GNSS RTK device manufacturer, visited Supergeo’s headquarters at the beginning of December 2017. During the meeting, Supergeo and DataGNSS reached a consensus on collaboration in future product development and marketing.

Headquartered in Hong Kong, DataGNSS is a company focused on developing and manufacturing high-precision handheld RTK devices at a reasonable price. Aiming at the market of asset inspection and GIS data collection, DataGNSS provides Android-based and Windows-based mobile devices with RTK technique, like its D302-RTK and D402-RTK model. In the future, the Android devices made by DataGNSS will be equipped with SuperSurv 10 to provide a more integrated GIS/GNSS solution.

Developed by Supergeo, SuperSurv 10 is widely known as an Android app that can help field technicians to collect GIS data, modify attribute tables, and process high-precision NTRIP signals. With continuous improvements and upgrades, the latest version- SuperSurv 10.1 has been unveiled recently in Q4 2017. In this release, Supergeo has extended its power by adding three major features, including custom coordinate system, snapping, and Layerset (a sharable pre-defined attribute table). Other than that, more basemaps and raster format are supported, like TIFF and Google Maps.