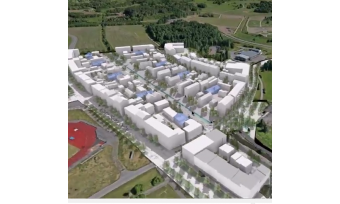 The Swedish 3D industry has repeatedly innovated in public use of 3D and in particular in external city planning applications, for which it has received several international awards. Now, several Swedish cities are once again involved in projects which are reinventing the use of 3D city models in promoting the city and public participation.

In September 2015 a digital dialogue was launched for one of the large development projects in Stockholm. In the early phase of the Norra Djurgårdsstaden project, the planning department invites citizens to contribute with suggestions and ideas. The dialogue is available to the public as a link on Stockholm city’s home page and uses the gigantic (500 square kilometre) photorealistic 3D city model as background. The huge 3D model is streamed to web, tablets and exhibition screens using Agency9 technology.

Earlier this year, the city relaunched its award-winning citizen portal Min Stad (meaning 'My City'). The portal invites citizens to post suggestions for development and improvements of the city. The portal has been operational since 2012 and has attracted tens of thousands of visitors and nearly a thousand suggestions from citizens.

At the Business Area real estate conference in Sweden opening this week Linköping City use 3D visualisation on a large touchscreen for the promotion of the municipality. Using municipality-wide 3D city models as the background, different projects and themes are presented using animated project models and dynamic graphs.

Håkan Engman, CEO of Agency9, commented his company is proud to be part of these projects and he stated Agency9 is committed to maintain a lead in 3D technology and solutions to support implementation of online Smart City application. The CityPlanner cloud services is a powerful visualisation tool for cities to publish projects to users on the web, mobile or on exhibition screens.