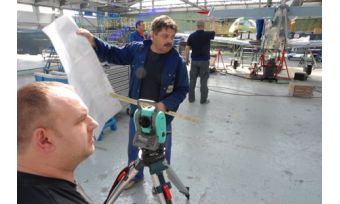 One of the world’s most successful military training aircraft, the PZL-130 TC Orlik manufactured by EADS PZL Warszawa-Okecie S.A., Poland, is now being levelled with the aid of a Nikon Nivo 5M total station. Aircraft levelling, both longitudinally (forward and aft) and laterally (left to right), is performed in the final stages of assembly.

Accurate levelling of the aircraft on the ground is required before precise alignment and symmetry checks can be performed to confirm that the geometry of the aircraft is to specification.

Prior to using the Nikon Nivo total station, levelling was accomplished with a theodolite and precision levelling rod. While the theodolite system was very easy to use, distances could not be measured and it required the height differences and calculation errors to be manually calculated and entered into the computer by hand.

ADS PZL Warszawa-Okecie S.A. sought a more efficient solution – one that would be easy to use and automatically collect and transmit data to an integrated computer. ImpexGEO suggested and demonstrated the Nikon Nivo 5M total-station for the task. Now with the Nikon Nivo 5M, levelling the Orlik aircraft is significantly faster and more reliable. The reflectorless technology of the Nikon Nivo 5M eliminates the need for a levelling staff, and all the height differences are checked using both distance and vertical angle measurements. All data are automatically stored in the internal memory of the total station for later export in ASCII format to a PC. In addition, the Nikon Nivo coaxial laser pointer speeds aiming and often eliminates the need to optically point the unit.

Although Orlik levelling technicians had never before used a total station, they required only two hours of technical training. The Nikon Nivo is easy to use and its shortcut user-defined keys made it possible to customise the total station to provide access to the most important features with just a single keystroke. The lightweight, small size of the instrument, its two independent hot-swappable batteries, and full-day battery life are also valued features of the new unit.

Re-surveying Firms for Levelling after Earthquake