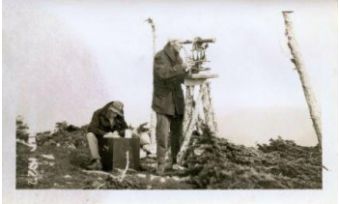 This year, Underhill Geomatics Ltd. celebrates 100 years of providing engineering, geomatics and land survey services in western and northern Canada. As it passes this significant milestone, the company is looking back on its development over the past century. It has grown through early development and adoption of new geomatics technologies and services, and this remains one of the hallmarks of the business to this day.

The company was founded in 1913 by brothers Clare and Jim Underhill as Underhill & Underhill, a partnership of British Columbia Land Surveyors, in Vancouver, British Columbia (BC). The firm was one of the pioneering enterprises in the early development of the West Coast region of Canada. Shortly after they started the business, war broke out in Europe. The company was shut down during the war while the brothers served overseas, with business resuming after the war had ended.

The BC region of Canada is largely a mountainous wilderness. Most survey activity outside of the urban centres was in support of resource development. Principal modes of transportation in the province included steamship, rail and horseback. It would often take weeks of travel by pack train, over mountains, ice fields and rivers, to reach an area to be surveyed. Surveys could take up to six months to complete. In the 1920s, Clare Underhill would often travel on horseback to Atlin in northern BC to spend the summer working with their new partner, Horace Fraser, on mineral claim surveys.

After WWI, Underhill was heavily involved in geodetic triangulation and mapping surveys for the Province of BC. Coastal triangulation and mapping supported the development of early navigational charts. BC’s surveyor general instructed the surveyors of the day to give names to geographic features. Jim Underhill did just that, and to this day many of BC's geographic features carry names associated with the Underhill family or with the other members of the survey parties.

This was the era before the advent of aerial photogrammetry. Mapping of mountains and valleys was accomplished via triangulation and stadia. Mountains would often have to be climbed many times before weather conditions were such that measurements could be made. Consequently, survey crews were credited with the first ascent of many of the mountains in BC.

On one of these mountain valley surveys in 1927, the surveyor general instructed Jim Underhill to triangulate and trigonometrically determine the height of a mountain in the coastal range that was creating quite a buzz in the mountaineering community. Jim did so during his survey and reported back his findings to the surveyor general. At 13,260 feet (4,042 metres) the ‘Mystery Mountain’, as it was then known, was the highest mountain identified within BC. It was soon renamed Mt. Waddington, and to this day is still the highest peak within BC. They were truly ‘professional adventurers’.