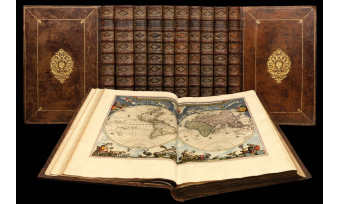 An exceptionally well-preserved first edition of the ‘Atlas Maior’ by the world-famous 17th-century Dutch cartographer Joan Blaeu has sold at auction in Brussels, Belgium, for €600,000. According to the auction house Arenberg Auctions, the work was purchased by a private collector at the sale on 26 May. Experts had valued the atlas at between €250,000 and €350,000, but it ended up fetching close to twice that price.

Published between 1662 and 1665 in eleven volumes, the Atlas Maior contains extremely detailed descriptions of all the countries around the world. It comprises over 590 hand-coloured maps, as well as more than 3,000 pages of text including descriptions of continents, countries and regions. Due to the sheer scope of the atlas, it is also referred to as ‘the Google Maps of the 17th century’.

Joan Blaeu (1596-1673) is one of the most famous cartographers and publishers that the world has known. The colour version of the Atlas Major originally sold for 450 guilders, making it the most expensive printed publication of its time, and experts believe that between 200 and 650 copies were printed in total.