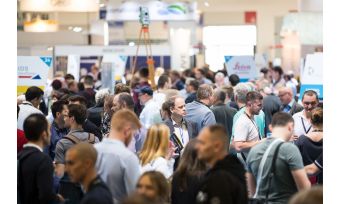 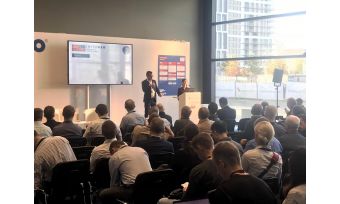 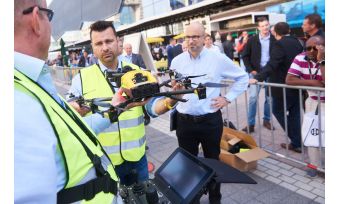 There is an abundance of data today, but how can it be processed, visualised and analysed to deliver real business benefits? We are in the midst of a digital transformation, and words such as Internet of Things, artificial intelligence and smart cities have become part of our everyday vocabulary, but which opportunities will digitalisation really create for society? And is the unmanned aerial vehicle (UAV or ‘drone’) truly democratising the geospatial industry? These are just some of the questions that may have crossed the minds of visitors to Intergeo 2018 in Frankfurt. And if they spoke to the right exhibitors and attended the right conference sessions, they hopefully found the answers they were looking for. Here, we share some of the insights we gained into the geospatial future during the world’s largest event for geoinformation and geodesy.

Intergeo, held in Germany every autumn, has become the leading meeting place for organisations in the global geospatial market. This year’s edition in Frankfurt, the financial capital of Europe and an international transport hub, once again attracted thousands of mapping and surveying professionals from across Europe and beyond. Hundreds of companies on the exhibition floor at the Messe Frankfurt venue were showcasing their latest innovations – often in the form of solutions rather than tangible products.

Despite the growing focus on solutions, Intergeo still featured plenty of familiar hardware such as total stations, laser scanners, digital cameras, GNSS receivers, mobile mapping systems and unmanned aerial systems. These are all indispensible tools for capturing data, but one key change over the past five years has been the sheer volume of that data, which now comes in terabytes or even petabytes. Total stations have become increasingly sophisticated, often requiring very skilled handling. Progress in laser scanners includes increased acquisition range, accuracy and speed combined with reduced size and weight. Intergeo also provided surveyors with reliable, innovative GNSS survey solutions – multi-constellation use, multi-frequency tracking – that meet their specific requirements, such as flexibility, low power consumption and field-upgradeable software. Particular eye-catchers among the exhibits were the digital aerial cameras designed to expand the efficiency of aerial imaging operations, with a strong focus on new sensor developments, e.g. dual-frame sensors for RGB and NIR imaging.

In mobile mapping, advances in multi-sensor integration are paving the way for high-end mapping applications. At the conference session titled ‘What’s Next in Surveying and Mapping’, chaired by GIM International, Mladen Stojic, president of Hexagon Geospatial, explained that he foresees a shift in the focus from outdoor mapping to indoor and below-ground mapping. “In the USA, people spend 87% of their time indoors so there is a huge need for indoor mapping,” he commented. He added: “Our world doesn’t stop above ground, there’s a lot of change below ground too,” referring to the ever-expanding utility networks that need monitoring, visualising and analysing. At the same conference session, Erica Nocerino from Fondazione Bruno Kessler (FBK), described the potential use of smartphones for mobile 3D data capture. As portable low-cost mapping systems, smartphones can be used for indoor mapping and navigation in public buildings such as shopping malls and hospitals. Her research has included a real-life use case at an archaeological site in Paphos, Cyprus, in which multiple surveyors used the collaborative, app-based ‘Replicate’ workflow on a cloud-based server to generate and edit point clouds, resulting in 3D models that “inject real assets into a VR world”.

Unsurprisingly many of the innovations on display were linked to digitalisation, the driving force that is currently revolutionising our industry. In our data-driven world of surveying and mapping, the challenge is to extract the right information from the gigantic ocean of geodata as efficiently as possible. The data processing workflow has become much more user-friendly over the last few years, but at Intergeo it became clear that the variety of data types remains one of the key challenges. Mladen Stojic echoed this in his presentation on ‘Bridging the Divide – Smart Digital Reality’, saying that one of the main problems is how to combine dynamic data with static data. “A smart solution consolidates changing data and reacts to change as change occurs,” he stated. He outlined several ways in which Hexagon is bridging the divide between static and dynamic data, including for conducting a census, for community policing and for public transport authorities.

From data to decision-making

Big geospatial data is an important asset, but processing and visualisation tools are essential pillars for analysis and decision-making based on that data. On the exhibition floor, companies such as nFrames and Racurs showcased photogrammetry solutions that transform massive imaging projects into dense point clouds, digital surface models (DSMs), seamless true orthophotos or textured meshes. On the point cloud side, there has been a wave of high-end software solutions to store, process, analyse and visualise the vast datasets of a staggering amount of three-dimensional points. Companies such as RIEGL, Trimble and Pythagoras all displayed their newest products and increasingly user-friendly methods for turning data into valuable geospatial end products. Meanwhile, at the GIM International conference session, Gerd Hesina, CEO of VRVis, addressed the ‘visualisation challenge’ and presented several examples of how a combination of spatial and non-spatial data can be visualised in interactive, high-accuracy georeferenced large-area 3D models. Use cases include tunnel monitoring, traffic planning, flood management in heavy rainfall scenarios and even the use of visualisation algorithms for geologic interpretations on the next Rover mission to Mars.

Democratisation of the geospatial industry

Unmanned aerial vehicles have been described as a ‘democratic tool’ that have triggered a major change in the approach to geoinformation as they have become cheaper, more flexible and deployable, and easier to use, coupled with increasing processing automation, cheaper hardware and a rise in open-source solutions. In his presentation on ‘UAV Photogrammetry, Where Do We Stand?’ during the conference session, Francesco Nex from the University of Twente predicted a shift towards standardisation rather than customisation, since drone replaceability is key in mission-critical situations such as first response and fire-fighting. In terms of automation, real-time processing remains an issue, he said, since onboard processing is linked to high energy consumption while the use of a remote PC is associated with high latency. This poses problems for collision avoidance, for example. Further challenges still to be overcome include bandwidth issues in an increasingly ‘connected’ world, plus more effective use of automation (including deep learning) and further harmonisation of the regulatory situation.

Geomatics and the smart city concept

One of the central themes of Intergeo was the smart city concept, which relies on an endless stream of data acquired by sensors all over the city. During the traditional Intergeo press conference on the Wednesday, Hansjörg Kutterer, director general of the German National Mapping Agency (BKG), stated that skilled surveyors play an essential role in providing context for the geodata that forms the skeleton of a smart city and designing truly effective solutions. By bridging the gap between the geospatial community, cities and politicians, Intergeo’s ‘Smart City Solutions’ platform aimed to highlight the huge opportunities that the smart city phenomenon offers for surveyors. Lorenzo Martelletti, director of strategy and products at Pix4D, echoed this in his presentation on ‘The Impact of AI and Machine Learning on Geospatial Data’ at the GIM International conference session, reminding the audience that “there will be around 45 billion cameras by 2022,” which is very interesting for the development of geospatial-related applications. Artificial intelligence (AI) and deep learning will be catalysts for further advancement, with machine learning already being used to train processing software and enable automatic classification of point clouds or to remove irrelevant parts – such as the sky – from imagery. Looking ahead to the future, Lorenzo Martelletti suggested taking a more holistic approach: rather than using drones as ‘flying cameras’ and then using software to reconstruct from the data they capture, projects should be designed around a flight plan and the right sensors to solve a specific business problem. One thing is for sure: there will be no shortage of innovations at future editions of Intergeo!