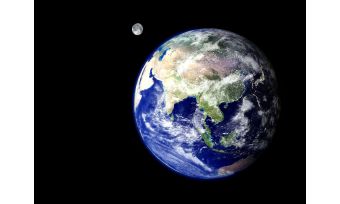 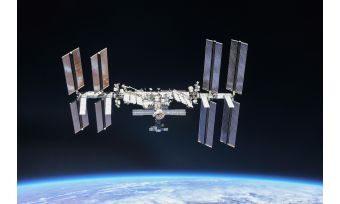 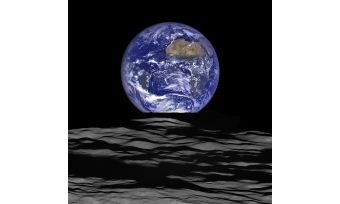 What if circling the Earth were as easy as going on a bike ride? Just imagine: the extraordinary, stunning views from orbit would be accessible to everyone with the same amount of effort as cycling through the nearby countryside. But would the impact of the billions of earthlings be visible from above? And would it change people’s attitudes towards our planet?

Astronauts – who are the only ones lucky enough to have seen the view with their own eyes – describe the journey into space as overwhelming and breathtaking. The Dutch astronaut André Kuipers openly admits that orbiting the Earth made him realize just how small and fragile this sphere we live on is. There is even a term for the consciousness-changing experience of observing Earth from a great distance: the ‘overview effect’. As ordinary mortals, we have to use our imagination to experience a similar overview effect – but it’s not impossible. We’ve recently had some very clear night skies here in the Netherlands, and I saw a crescent moon and a magnificently bright Venus rising above the western horizon after sunset. I even witnessed the International Space Station (ISS) passing over several times, at roughly 500km above the surface of our planet. To be honest, I felt the same excitement as when my father took me and my brother to an observatory to see a lunar eclipse in our childhood. The ISS was not the only moving object visible to the naked eye during my skygazing; I also saw several tiny dots passing overhead. When I touched base with a renowned Dutch science journalist via Twitter, I learned that they were low-orbit Starlink satellites, recently launched by Elon Musk’s SpaceX company as part of plans to offer broadband internet in remote areas across the globe.

Now that coronavirus has spread to countries all over the world, Earth looks different from above. Better, actually. Earth observation satellites that are mapping the atmosphere have recorded a massive reduction in air pollution. According to the European Space Agency (ESA), the Copernicus Sentinel-5P satellite has detected strongly declining NO2 emissions in many densely inhabited and industrialized areas. Everyday life has largely come to a standstill due to the COVID-19 pandemic – seemingly to the relief of Mother Nature, who is taking this opportunity to pause for breath.

Earth is vulnerable. Astronauts realize that when they experience the overview effect. Now it is time for us to realize it while keeping both feet firmly on the ground. Maybe the time has come to stop chasing our tails, and to protect our planet for the sake of future generations.

A final note to Elon Musk: providing internet access for all earthlings is a worthy goal, but could you please turn down the lights a little on your swarm of satellites? I still want to be able to see the stars and planets in our solar system, to feed my imagination as I gaze up at the night.