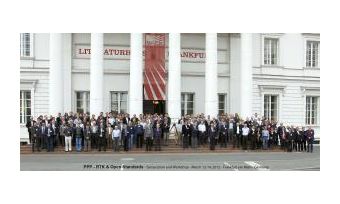 Unlike conventional differential GNSS methods, Precise Point Positioning (PPP) does not (directly) utilise nearby reference receiver measurements. When performed on GNSS-equipped mobile phones and CarNav systems, PPP uses carrier phase measurements instead of pseudoranges and very accurate satellite orbit and clock data in place of the information in the broadcast navigation message.

While PPP has many advantages, one of its critical shortcomings is the lengthy period for carrier phase ambiguity resolution. However, its supporters claim that it will very soon be possible to have reliable sub-decimetre accuracy, real-time positioning, anywhere in the world, using commercially available receivers and software, with hardly any initialisation time – a technique known as PPP-RTK.

Organised by the German Federal Agency for Cartography and Geodesy (BKG) in Frankfurt am Main on 12-13 March 2012, the PPP-RTK & Open Standards Symposium attracted 180 participants from more than 30 countries. The first day dealt with the following topics:
a) An overview of plans for the RTCM message format to become an open standard for PPP and PPP-RTK, as well as support transmission to user receivers of multi-GNSS, phase bias corrections, and ionospheric information.
b) Overviews of different global ionospheric ‘map products’ – important for PPP in general but not yet at the level needed for PPP-RTK.
c) Regional Augmentation: Examples of how PPP and PPP-RTK could be aided by regional reference receiver networks.
d) Different approaches to handling phase biases.

The second day continued with the following topics:
a) Presentations on existing services by Trimble, Fugro, John Deere and Veripos. All four claim to achieve accuracies of 5-10cm for real-time global positioning.
b) Emerging Services: an overview of the International GNSS Service’s (IGS) new real-time products, the Wuhan University regional augmentation system, and two presentations on Japan’s QZSS, including the use of regional augmentation for PPP-RTK correction determination.
c) Product Dissemination: a presentation on the industry standard NTRIP protocol, and there a presentation on the ‘LightSquared’ controversy and on using satellite TV links for transmission of PPP-RTK corrections.
d) Tools and Applications: two presentations on applications (precision farming and tsunami-buoy monitoring) and two on PPP-RTK tools, which included the announcement that the RTKLIB open source software will have PPP-RTK functionality by the second half of this year.

Since information about the atmosphere, in particular the ionosphere, is currently a bottleneck and challenge for PPP-RTK, regional augmentation – enabling the provision of such information as correction messages – is important.

This debate is now open regarding how dense the networks of PPP-RTK reference receivers should be, and what the crucial advantages of PPP-RTK are over conventional GNSS RTK. If the reference receivers must be spaced typically less than 100km apart for PPP-RTK to approach the level of performance of conventional GNSS RTK based on differential GNSS principles (centimetre accuracy with very short initialisation periods), then PPP-RTK is not likely to displace network-based RTK techniques soon for critical machine guidance applications on land. The possible impact of multi-constellation GNSS on all forms of precise positioning should not be underestimated.

This symposium confirmed the increasing interest in, and progress of, PPP-RTK and emphasised the importance of the development of open industry standards to ensure that PPP-RTK is confirmed as a valuable addition to the GNSS precise positioning toolbox. The IGS real-time orbit and clock service will be described in a future article.

Why Geospatial Is on the Cusp of a New Age