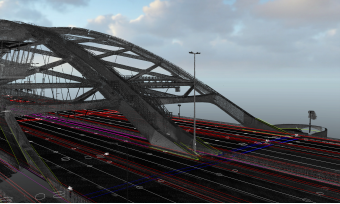 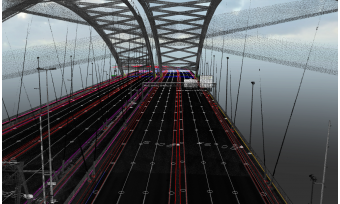 The Van Brienenoordbrug bridge is the busiest in the whole of the Netherlands, with an average of 235,000 vehicles driving over it every day. Approximately 150,000 ships and boats pass under it annually, and it is raised around 150 times a year to allow them through. To keep this bridge safe – now and in the future – it was necessary to gain a complete picture of its current state of repair, so Geomaat designed a digital terrain model (DTM).

The Van Brienenoordbrug is a large twin tied-arch bridge on the eastern side of Rotterdam. It carries the 12-lane A16 motorway across the Nieuwe Maas river. Constructed in 1965, it has been a landmark on the local skyline ever since. It is named after the Brienenoord islet in the river, on which some of its pillars have been built.

“I didn’t expect Geomaat to generate so much data with a single Streetmapper scan,” said Hans Haenen, Infrastructure Project Manager at Royal HaskoningDHV.

In late November 2019, Geomaat surveyed the Van Brienenoordbrug bridge using the Streetmapper-IV. A single scan was sufficient to generate lots of data about the bridge. At the same time, 360-degree images were captured of the bridge. All the data was converted into a 3D point cloud, which was subsequently used to design a complete DTM of the bridge from above. The DTM design reveals all the kinks and dents in the bridge.

When the DTM was supplied to the client, Rijkswaterstaat (RWS), they expressed their surprise at how much data could be captured in a single scan using the Streetmapper-IV: the entire road surface on the bridge as well as surrounding objects, such as the traffic barriers and the arches. All hard surfaces and cable ducts are also clearly visible. The 3D point cloud was used to design a DTM to provide insight into the current state of the bridge.