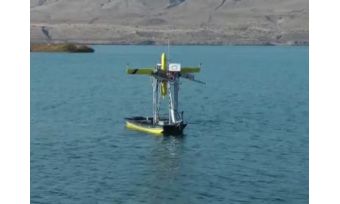 The newest aircraft carrier does not have acres of flight deck. In fact, it has no deck at all. Rather than carrying a crew of thousands, it sails without a soul on board. Yet the aircraft that it operates can fly much longer and further than anything based on a fleet leviathan. That aircraft is Aerovel’s 20kg Flexrotor, which combines VTOL and a small footprint with a Hawaii-to-West Coast range. The carrier is a 4-metre skiff equipped to launch, retrieve and service the Flexrotor automatically.

In what are believed to be the first-ever flight cycles of an unmanned aircraft based on an unmanned boat, Flexrotor launched from the remotely controlled skiff while underway, climbed out as a helicopter, transitioned to wing-borne flight, imaged the skiff while flying at low and high speeds, transitioned back to thrust-borne flight, and retrieved autonomously onboard. The aircraft then shut down, was automatically refuelled and restarted, and repeated the first flight, finally being secured onboard in a docking station. Aircraft and skiff then came ashore, and were driven 160 kilometres home into the setting sun.

The operation represented a marked advance in the state of the art in miniature robotic aircraft, and in the ability to deploy kilogram-scale payloads with unprecedented flexibility. Flexrotor’s autonomy throughout the operations cycle, combined with small footprint, long range, low noise, and two-day endurance, offers economy sufficient to enable long-promised civil applications at sea and ashore, including geological survey, weather reconnaissance, fishery surveillance, environmental monitoring and offshore patrol.

Aerovel is a privately held company based in the northwest United States. It was founded in 2006 to develop autonomous aircraft, primarily for civil applications.

Watch a video of the first flight here.