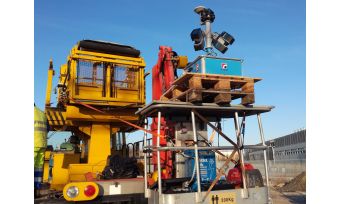 On behalf of the Emilia Romagna Railways (Ferrovie Emilia Romagna), Siteco is carrying out a verification project of the clearance outlines of the railways in this region of Italy. For the railway inspection, Siteco used the Road-Scanner 4 mobile mapping system associated with the Rail-SIT software application, expressly developed to optimize the analysis and inspection activities typical of this sector. The combination of hardware and software allowed Siteco to provide the regional body with a complete solution.

Mobile mapping systems (MMS), which are increasingly implemented and exploited in the railway sector with success, allow track detection in a short time, with minimum effort and unimaginable efficiency compared with the use of traditional tools.

Starting from the point clouds and the trajectories produced by the MMS, with Rail-SIT it was possible to automatically process the collected data and extract the geometry of tracks and catenaries, dynamically generate the clearance outlines, and calculate the interference. The first phase of the F.E.R. project included three railroad lines: Bologna-Portomaggiore, Parma-Suzzara, Bologna-Vignola.

From the mobile mapping survey, the main geometric measurements of the lines were obtained automatically (3D-axis trajectories) and the key parameters (plane and altitude curvature radius, gauge and superelevation) easily identified. Rail-SIT then made it possible to automatically produce sections with the relating dimensions, cylindrical views, track plans, with the indication of the generated sections and curvature radius, besides reports of the interference analysis and the track geometry.

Lastly a library of all the parametric clearances was developed according to the European Standards. The library consists of an Excel file in which the clearance dimensions are calculated as a function of speed, superelevation and radius of curvature.

All the documents necessary to define the state of the infrastructure were produced according to the standards in force. The survey data obtained were also used for planning some restoration interventions and railways adaptations.

The benefits of automatic analysis

At the end of this first phase, the technical director of F.E.R., Ing. Fabrizio Maccari, showed his satisfaction with the work done, stating that "The new implemented technology will make it cheaper and easier to guarantee the safety of the railway lines and their compliance with the European regulations ”.

The technical and sales director of Siteco, Ing. Augusto Burchi, confirmed the growing interest for Siteco‘s technology of automatic analysis and inspection in the railways sector both in Italy and abroad, and underlined the flexibility of Siteco’s solution capable of complying with any regulation.

The application was in fact already adopted also by the Japanese company NIPPON INSIEK (former ASCO-DAITO) to provide services to the Japan Railways, similar to those supplied by Siteco to FER.