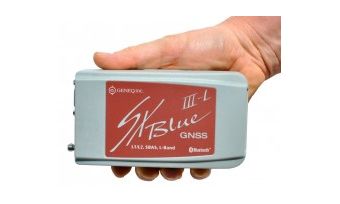 Geneq, Canada, has announced the SXBlue III-L GNSS, a palm-sized L1/L2/GLONASS GNSS receiver that is designed to use OmniSTAR’s G2 or HP service to attain 10cm accuracy in all regions of the world.

The SXBlue III-L GNSS is designed to use OmniSTAR’s G2 service, which supports GPS and GLONASS satellites, to provide 10cm accuracy in real-time in most parts of the world. The ability to track both GPS (31 satellites) and GLONASS (24 satellites) significantly increases the number of satellites in view, making the SXBlue III-L GNSS more productive in areas where trees, terrain or buildings block satellite visibility. It also outputs raw observation data that can be used for post-processing using free, online processing software services such as OPUS.

In addition to the OmniSTAR service, the SXBlue III-L GNSS also supports RTK GNSS. For 1cm real-time accuracy, the RTK option lets the user connect to an RTK Network or a single RTK base station using standard RTCM and common industry formats. Furthermore the RTK network or RTK reference station does not need to support GLONASS for the SXBlue III-L GNSS to fully utilise the benefits of GLONASS, according to Jean-Yves Lauture.

The SXBlue III-L GNSS is compact and rugged for optimal field use, requiring no backpack or external batteries. It was designed to meet the IP-67 rating, and can survive accidental immersion in water. The SXBlue III-L GNSS comes with a small, hermetically-sealed antenna that receives GPS, GLONASS, SBAS and OmniSTAR signals.

The SXBlue III-L GNSS is targeted at high-precision users in industries such as surveying, GIS, utilities, construction, agriculture, engineering and other natural resource industries in addition to local, state and federal government users.